Armada Deep embarks on full US Tour in October 2016 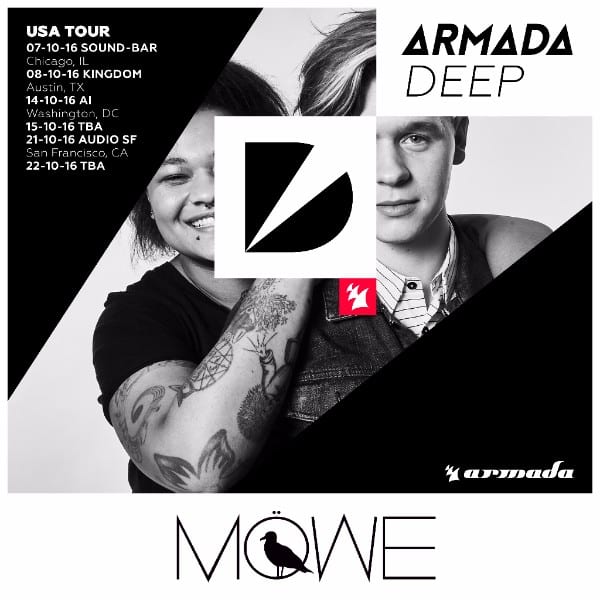 Armada Deep embarks on full US Tour in October 2016

Armada Deep is getting its own full-fledged US tour. Armada Deep, which serves as one of the main pillars of Amsterdam-based record label Armada Music, will hit a host of major cities in the US between October 7th and October 21st. The artists involved are true floor fillers: MÖWE, De Hofnar, and Boy Kiss Girl.

Armada Deep emerged as a re-branded label in August 2014 and has since seen over 200 releases from artists such as Boy Kiss Girl, Calvo, De Hofnar, Felix Jaehn, Jan Blomqvist, Matt Meler, Plastik Funk, Pretty Pink, Sebastien, and more. Additionally, Armada Deep has seen its events hit various of the world’s most beloved Deep House hotspots (from Amsterdam to South Africa) and can now add the US to its ever-expanding list.

MÖWE, one-third of this surprisingly groovy Armada Deep line-up, consists of Mel and Clem, both hailing from Vienna, Austria. They met up in 2013 and started to overflow the deeper side of Electronic Music with high-quality singles from there on out, including ‘Chasing Clouds’, ‘Lovers Friends’ (with Daniel Nitt), and fresh addition ‘Your Skin’ (feat. Bright Sparks).

De Hofnar serves as Armada Deep’s tastemaker and vibe manager, set to spotlight his vivid signature sound throughout the US tour. The highly talented Dutchman scored big with records such as ‘Back In The Day’ (with GoodLuck) and ‘Oxas’ (with GAMPER & DADONI), of which the latter racked up almost 12 million plays on Spotify.

Completing the Armada Deep trinity, Boy Kiss Girl adds an extra dose of excitement and thrill to the tour. His single ‘Ocean’ on Armada Music sub label The Bearded Man hit full force and gathered over 7 million streams to date on Spotify alone. Still shrouded in secrecy, this act will bring something to the tour you cannot fully comprehend unless you witness it firsthand.