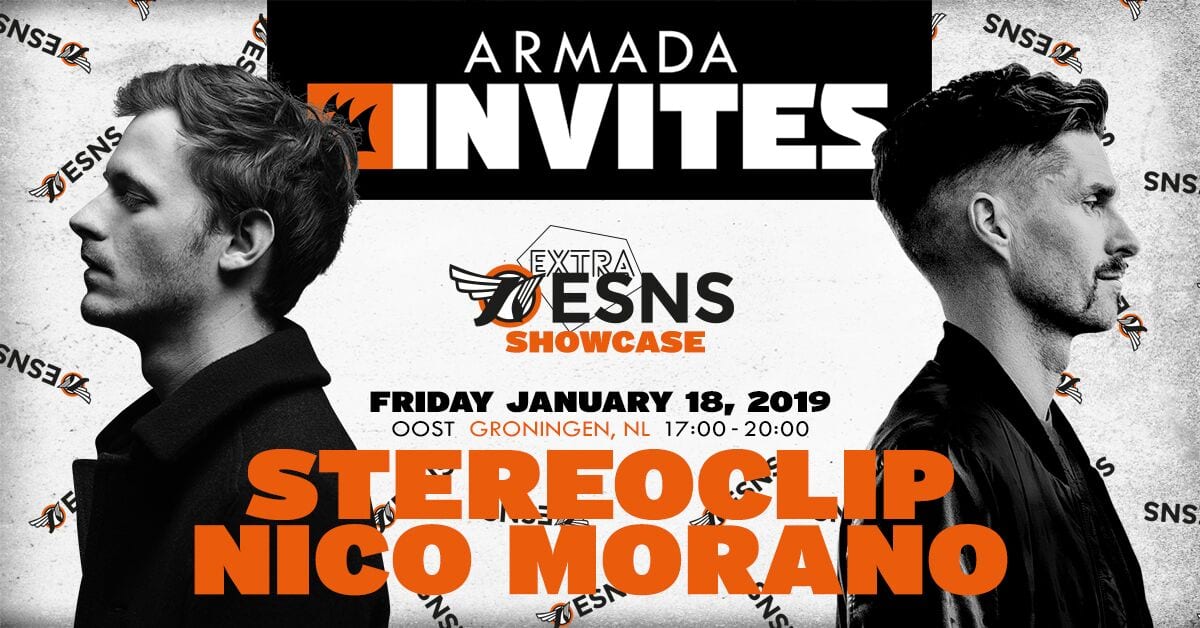 For the first time ever, Armada Music is bringing its own event to Eurosonic Noorderslag (ESNS), one of the foremost music conferences and festivals in the Netherlands. On Friday, January 18, the world’s biggest independent dance music label will host its 'Armada Invites' showcase in Groningen-based night club Oost with performances from Belgian talents Stereoclip and Nico Morano.

The first name on the line-up for Armada Music’s ESNS showcase at Oost, Stereoclip has been making big waves in the scene with his own brand of deep, vocal-oriented, mysterious techno music. After the success of his first album (‘Hometown’), the Belgian talent released his second artist album, ‘Travel’, at the end of 2018. Many of the incredible singles on that eclectic electronic album will be showcased at ESNS on January 18.

Completing the two-part line-up of the ‘Armada Invites’ showcase, Nico Morano is known all throughout Belgium (and beyond) for his sophisticated signature sound: a blend of deep, melodic House adorned with a strong emotional touch. He has played hundreds of shows at highly respected clubs such as La Rocca, Café D’Anvers, Fuse, Ampere, Decadance and Kelly Palmer, esteemed festivals such as Paradise City Festival, Cirque Magique, Laundry Day, Ostend Beach, and Thé Dansant, and even world-renowned staple festival Tomorrowland.

Founded in order to stimulate and push the circulation of European music across the European continent and beyond, non-profit organisation ESNS hosts the renowned festival every year in Groningen, the Netherlands. Spanning four days, a host of acts of (exclusively) European origin and an almost full spectrum of musical styles, Eurosonic Noorderslag has played a pivotal role in the breakthrough of artists such as Shame, Her, Alma, Roosevelt, Aurora and Dua Lipa.