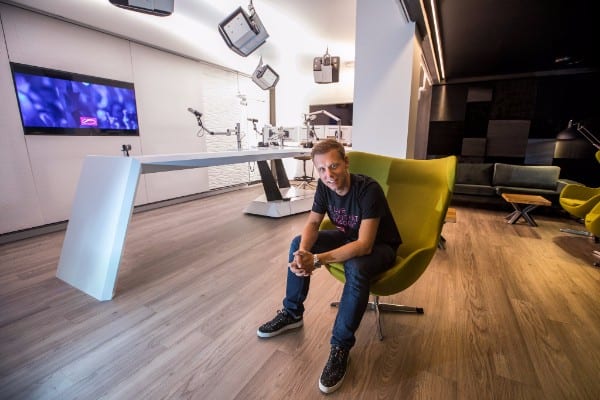 Ever the man to come up with new ways to improve and perfect his craft, Armin van Buuren has once again gone all out. Tonight, the world-renowned Dutchman is to open his new radio studio in Amsterdam, built specifically to enhance the A State Of Trance experience for his fans with a full video stream system.

"Now that 2017 has started, I can finally share something really exciting with you”, says Armin van Buuren in the official announcement. “I feel that the time has come to take the next step, to go next level with A State of Trance. To accommodate this, I'm opening my very own radio studio in the HQ of Armada Music on February 2nd.”

“From that moment onward, the episodes of A State Of Trance will be so much more than just a listening experience. Thanks to a full video stream system, you will be able to watch me and A State of Trance live on my Facebook page and YouTube channel, every Thursday from 8 PM till 10 PM CET. In addition, we can offer you a behind-the-scenes look from time to time and will occasionally invite fans and artists to drop by during the live show as well. We will be able to connect like never before and I hope you’ll love this new development every bit as much as I do.”

Tonight, after the official opening of the radio studio, the 800th episode of A State of Trance will be streamed live on Armin van Buuren’s Facebook page and YouTube channel from 8 PM to 10 PM (CET). A little over two weeks from now, on February 18th, the milestone will be celebrated in the Jaarbeurs in Utrecht, the Netherlands, with a brand-new edition of the biggest Trance event in the world: A State Of Trance 800 Utrecht. More info and tickets: www.astateoftrance.com