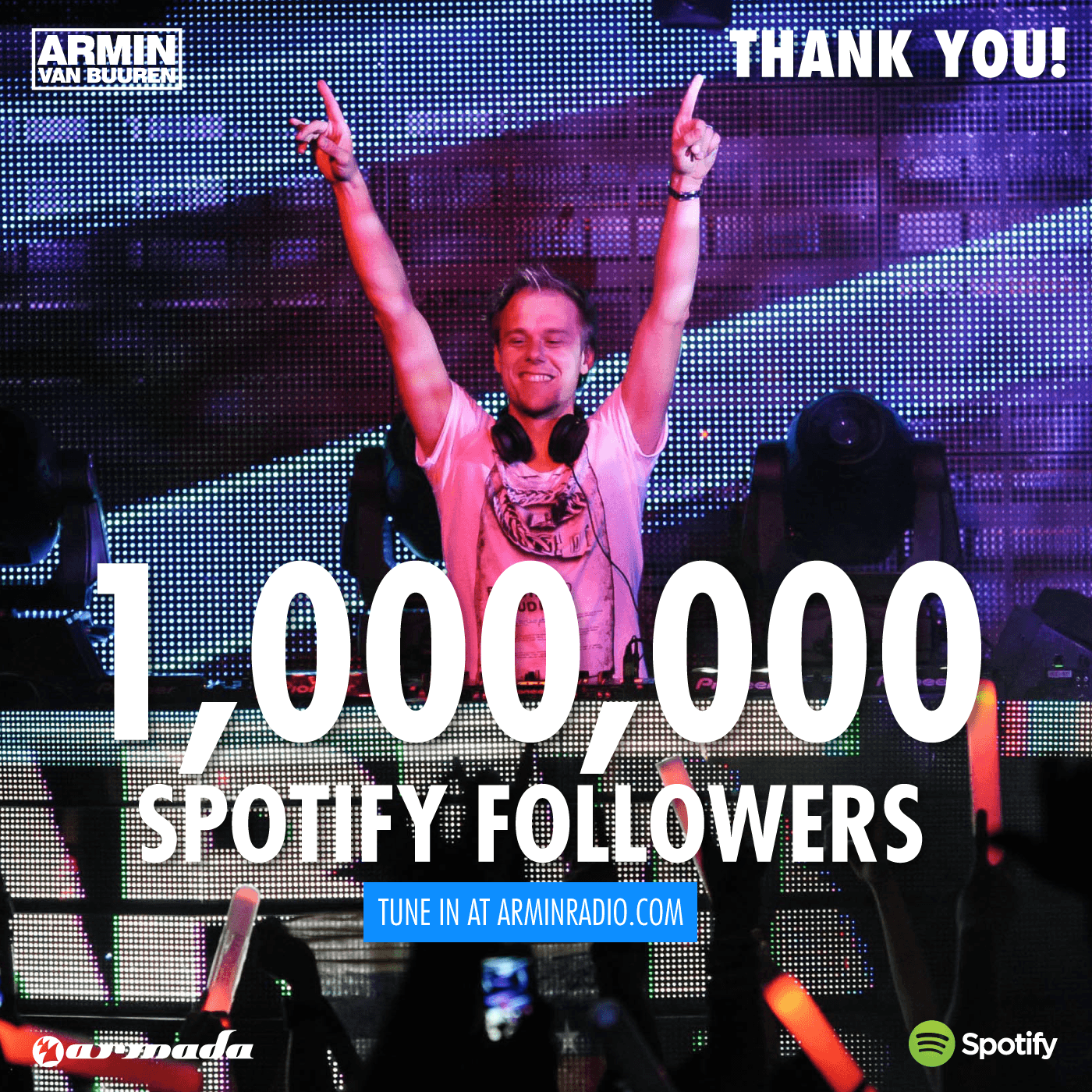 World-famous Dutch DJ and producer Armin van Buuren just broke the one million mark for Spotify followers. Armin van Buuren is the first and only Dutch artist to reach this milestone, and this accomplishment makes Armin one of the top 50 most followed Spotify artists in the entire world, in any genre. There are only a small handful of EDM artists in the one-million-plus league, and Armin is one of the top 5 most followed DJs globally.

Armin: “Wow! 1,000,000 followers on Spotify. I would like to thank all my fans for following my personal Spotify playlists and the ASOT playlist. My label Armada Music and I believe streaming is the future and are committed to a long-lasting partnership with the platform.”

As the only DJ who currently uploads his weekly radio show (A State of Trance) to Spotify, Van Buuren has always had a special relationship with the platform. Other popular Armin playlists include ‘The Armin van Buuren Top 50’ and ‘Who’s Afraid of 138?!’. He will also be adding special new celebratory Spotify playlists and content in recognition of this landmark.

Will Hope, Director of label relations, EU at Spotify: “Armin and Armada have always embraced Spotify as both a promotional and commercial platform. They have worked hard to find and develop their fan base on Spotify and have used innovative releases to develop the artist-fan relationship. Armin’s popular weekly radio show A State Of Trance has been a big part of this. Many congratulations on reaching 1M followers!”

As a thank you to the fans who made it happen, Armin will be giving away a Philips M1X-DJ console, 25 Algoriddim Djay 2 apps, and 25 premium Spotify subscriptions to a lucky few of his followers. To enter the contest, go to www.arminvanbuuren.com or Spotify and follow Armin’s Spotify profile. The winners will be selected at random and the winner of the M1X-DJ will be announced on the A State of Trance radioshow on July 24th. The remaining winners will receive a personal message via Spotify on July 24th, 2014.

About Spotify
Spotify is an award-winning digital music service that gives you on-demand access to over 20 million tracks*. Our dream is to make all the world’s music available instantly to everyone, wherever and whenever you want it. Spotify makes it easier than ever to discover, manage and share music with your friends, while making sure that artists get a fair deal. Spotify is now available in 57 markets globally with more than 40 million active users, and over 10 million paying subscribers. Since its launch in Sweden in 2008, Spotify has driven more than US$1bn to rights holders. Spotify is now the second biggest source of digital music revenue for labels in Europe, and the biggest and most successful music streaming service of its kind globally.