Soundtracking the sun rising over this beautiful city, the Cairo-born, Montreal-based producer created the stream as part of the Electronic Labor Day and Beatport fundraiser For Beirut. (The fundraiser is still live, you can donate HERE.) His performance is mesmerising in both virtuosity and beauty.

Still in his early twenties, the multi-talented musician/composer has received over 460 million streams of his own compositions, which include the track ‘Mosaïque’ the video of which was filmed at the Pyramids of Giza. His live set includes keys, electric and acoustic guitars, saxophone, Ableton Push 2, Roland SPD SX, Akai EWI USB…

With a life shared between Egypt and French Canada, Ash’s mission is to blend middle eastern and French/European influences in electronic music. He has been producing his own work since age 13, having studied piano since emulating his elder brother aged 6, and has learned his impressive range of other instruments from scratch, simply as a way to feature them on his early tracks. 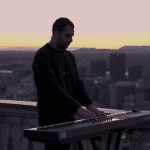