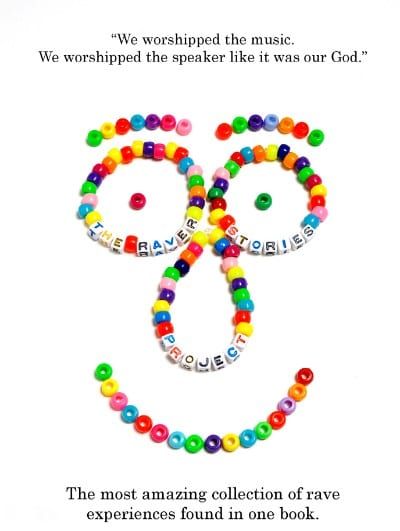 In the 1990s, an incredible revolution swept across dance floors worldwide. It was an underground revolution called the rave scene, where thousands of electronic music fans gathered at secret events across the country, and partied well into the morning to the most cutting-edge beats on the planet. Many had their lives changed in often positive and profound ways, thanks in no small part to the rave scene’s warm and embracing nature. It was a social movement unlike any other, the most significant since the rise of hip-hop.

Once a raver, always a raver it seems, as second time author, professional photographer, and longtime raver himself, Michael Tullberg delivers a curated collection of essays entitled “THE RAVER STORIES PROJECT”, written by those who lived the experience firsthand. Exploring the early days of a clandestine subculture, readers are led on a journey of how truly powerful the rave scene has been, and continues to be, in people’s lives- then and now. Everyday people relive meaningful stories on how they came to discover and embrace the culture and lifestyle of the rave scene, and how becoming a raver positively impacted their lives.

THE RAVER STORIES PROJECT is the book that reveals the rave scene as it really was and is, compiled and edited by one of the ultimate rave insiders—dance music photojournalist Michael Tullberg. Having worked for virtually all the major electronic music magazines of the period, such as URB, MIXER, BPM Culture and Insider, Tullberg has long been dissatisfied with the mainstream public’s negative perception of raving. In late 2016, he put out a Call for Story Submissions to the electronic music community, asking for their most memorable, exciting and even transformative experiences in the rave scene. The response he got was nothing less than phenomenal.

Tullberg received stories from around the world, ranging in time from the original UK rave explosion in the late 1980s until the present day. The scope of the stories is impressively wide, including warehouse parties, desert raves, mansion parties,underground clubs, and much more. Tales came in about the over-the-top lunacy of Electric Daisy Carnival, the elite VIP room at Ministry of Sound London, and the desert wastes of Burning Man, among many others. The personal experiences of the raver authors are often eye-opening, such as the stories from survivors of emotional and physical abuse who found solace in the healing arms of the rave scene. One account is from a Chicano DJ and producer who credits the rave scene from saving him from the clutches of gang life. Another tells of a desert party blasted by a midnight sandstorm. Along the way, the reader experiences the growth and development of the scene itself, from its underground beginnings to the mammoth festivals of today. THE RAVER STORIES PROJECT is an important account of our collective rave history and the evolution of electronic music entertainment.

THE RAVER STORIES PROJECT contains thirty essays over 250 pages. It is the genuine article, a true representation of a cultural and musical revolution.

THE RAVER STORIES PROJECT will be released under Tullberg’s own 5150Publishing imprint on August 15th, and is available for pre-order on Amazon now.