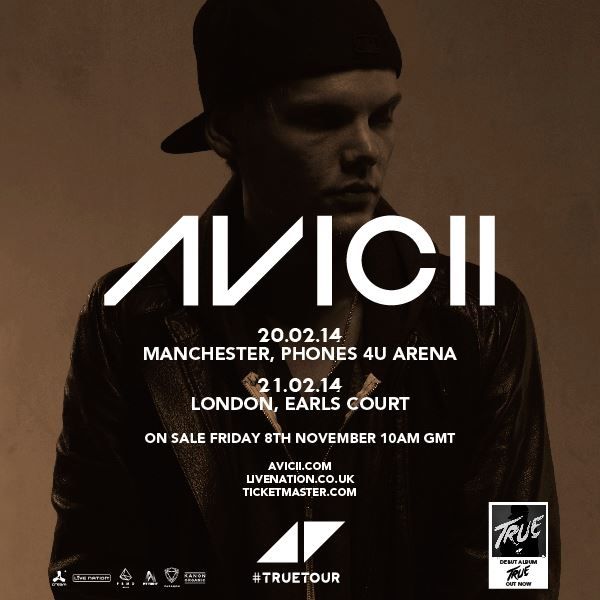 Following headline performances at EDC London and Creamfields this year, Avicii will be returning to the UK once again to wow fans with his True Tour kicking off at Manchester’s Phones 4u Arena on Thursday 20th February 2014 followed by a landmark show at London’s Earls Court on Friday 21st February 2014.

This year has been monumental for Avicii, reaching the #1 position in over 70 countries with “Wake Me Up”, the track also held its position on BBC Radio 1’s A-list for an astonishing 10 weeks and has sold over 6 million singles worldwide to date. In September 2013 his first album, True, debuted at #5 on the US Billboard 200, and #2 in the UK album chart. Second single “You Make Me” debuted at #5 in the UK singles chart #1 in the UK official dance chart, the lyric video alone gathering over 3 million YouTube views… in just one week.

Swedish born Avicii is one of the world’s most in-demand DJ/Producers who has raised the bar with his epic live shows, expect breathtaking production for what is set to be two unforgettable and unmissable events. Tickets for Sweden’s Tele2 Arena sold out in a record three minutes earlier this month therefore we urge fans to purchase their tickets quickly to avoid disappointment.