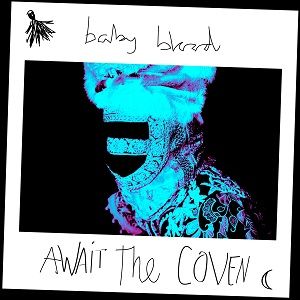 Following the success of her i-D-championed single ‘Figurine’, enigmatic Danish songwriter and producer Baby Blood returns with her lucid debut EP ‘Await The Coven’ on 17th June via The Big Oil Recording Company.

Awash with an eclectic palette of influences, ‘Await The Coven’ dissolves the barriers between electronica and R&B with the aesthetic references of Japanese samurai culture, to form a trippy and outlandish soundworld. Glazed with the spectral production stylings of Flying Lotus and Yung Lean, and the reference-heavy tones of SZA and Doja Cat, it dives headfirst into a blend of gender-bending lyrics and ethereal dreamscapes, with a propensity for light, articulated whispers over contorted beats.

Having envisioned each song on the EP as a talisman, fiery opener ‘Figurine’ underlines Baby Blood’s dynamic and luminous style with its brooding melodies and off-beat rhythms, whilst a palpable sense of mystery can be found in the sensual sounds and psychedelic textures of the EP’s upcoming single ‘White Lotus’: a number that tackles the idea of being sober in an inebriated world.

The alter-ego of rapper and producer Lucy Love, Baby Blood is a masked super-heroine who divorces art from vanity, visually taking motivation from the luchadores of the high flying Mexican wrestling scene and translating their audacity in the ring into the imagery of her music. In Lucy’s own words, “Baby Blood toys with identity, as masculinity and femininity meet in a sonic cosmos with visual cues that traverse time, place and cultures. My focus is art, not the face behind it” – an approach clearly imbued in second single ‘Gender Science’, whose politically acute chorus topically chants “Fuck with gender fuck with gender” amidst bass-heavy electronics that lean towards artists such as Kelela and Nosaj Thing.

The momentum of ‘Await The Coven’ is gently slowed by the trippy ‘Deep Web Interlude’, before bursting back into life with the shape-shifting ‘Kaleidoscope’ and closing with the pop-imbued ‘Crystalline’, which concludes the ceremonial feel of the EP. Characterised by meditative and repetitive passages, Baby Blood’s visual music is echoed in her shamanistic live shows, where incense, masks and bells are employed to give the performance a ritualistic feeling.

Already backed by the likes of FACT, MTV, The 405 and BBC Radio 1, Lucy Love’s new incarnation highlights her as one of Scandinavia’s most exciting and extraordinary exports of the year. Continuing to build her unique, experimental sound to accentuate her art rather than her identity, ‘Await The Coven’ is set to add more fuel to the fire of her increasingly fascinating approach.