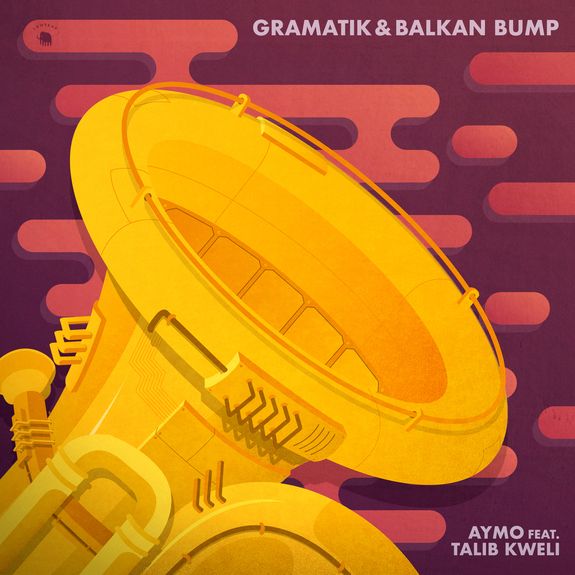 Gramatik continues to prove himself as a relentless musical force, leading into his anticipated “Re:Coil Pt.I” EP with the collaborative single “Aymo”. This release brings Gramatik back to his Balkan cultural roots, as he teams up with legendary rapper Talib Kweli and trumpet player/producer (and forthcoming Lowtemp signee) Balkan Bump for this energetic, world-influenced hit.

With a busy summer festival season behind him, Gramatik isn’t wasting any time when it comes to his touring schedule, and is now only a few weeks away from embarking on an epic fall tour, titled Re:Coil, visiting 26 European cities in France, Netherlands, Germany, Denmark, Luxembourg, Spain, Italy, Austria, Switzerland, Poland, Czech Republic, Belgium, Romania and Serbia, Gramatik will also be treating his fans to the release of his brand new 'Re:Coil Pt. I’' EP during the tour on October 20.

This year, Gramatik has already delivered a steady stream of new music, often in collaboration with old friends and new faces on the scene. After the GRiZMATiK track, “As We Proceed”, and a Ramzoid co-signed remix of Flume’s track “Wall Fuck”, he released two singles leading up to the EP he was secretly putting together. “Re:Coil Pt. I” is now set for release on October 20th, with Pt II following in 2018. The first single on the EP, titled “Recovery”, features frequent collaborator Eric Krasno who supplied vocals in addition to stellar guitar playing, while the second, “Voyager Twins”, was co-produced with Armada-affiliated duo Galactic Marvl and received a video treatment as well.

After the summer vibes of “Recovery” and a bass-heavier exercise in the form of  “Voyager Twins”, Gramatik is going back to his Slovenian roots for the third single on the EP. Teaming up with Balkan Bump and Talib Kweli, 'Aymo,' is based around the traditional brass sounds of the Balkans, with the track title translating to ‘Let’s Go’ in Balkan Slang. While a collaborative project, it nonetheless carries the unmistakable Gramatik stamp.

Balkan Bump is the newly rebranded project from trumpet player/producer Will Magid, based in Oakland. Will is an ethnomusicologist who has been gathering inspiration for his music on all continents, save for Antarctica. A set of his compositions can take you to a Cuban beach, a West African wedding party or a Serbian night club, all within 15 minutes. The musical pieces he is putting out are buoyant jams packed with rich layers of celebratory horns, bouncing percussion, classical strings and even a bit of ambient noise. In the past Will has performed with artists including Pretty Lights, Beats Antique and Bonobo, but is now focusing on his solo music. “Aymo” will lead up to the release of his world-influenced EP that will serve as a debut for his new project, but more on that to follow.

“Aymo feat. Talib Kweli” is out now via Lowtemp Records!