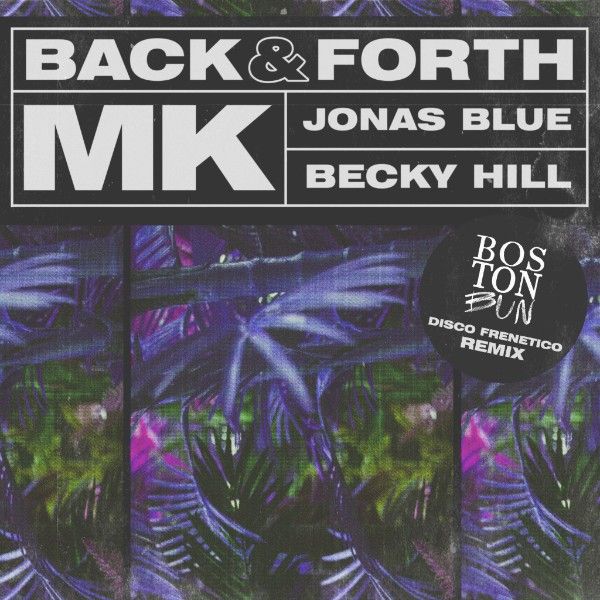 Lacing his mix with a funk-inspired bassline and vibrant disco-inspired tones, Boston Bun’s rework focuses on warm driven grooves; showcasing his production prowess and diversity as an artist.

Amassing over 10 million Spotify streams on his hit ‘Spread Love’, the French producer has proved his skills on both original productions, and remixes, previously reworking the likes of The Magician, Disciples and Jax Jones. Influenced by the Chicago house scene, Boston Bun has delivered his hip-swaying grooves to various venues worldwide, including London’s XOYO, Razzmattaz in Barcelona and Womb in Tokyo.

“Back & Forth” marks the second time the MK has teamed up with Becky, following the pair’s success with their 2016 Gold certified hit ‘Piece of Me.’  (over 58 Million Streams to date).

While friend and collaborator, Jonas Blue sprinkles his melodic touches throughout ‘Back & Forth.’ The home grown, UK talent is already a multi-platinum selling artist, who recently scored huge success with his summer anthem ‘Rise’. Frequent MK collaborator, Becky Hill is also known for her soulstering, powerful vocals on tracks like ‘False Alarm’ as well as her UK #1 single ‘Gecko’ with Oliver Heldens.

MK, who is an iconic house producer, artist and DJ may be best known for his timeless remixes and 2017 summer anthem ‘17’ (over 98 million Spotify streams). He is also the proud owner of his Area10 event brand, which has hosted parties worldwide, headlining stages at the likes of SW4, Creamfields and Croatia’s Defected Festival, as well as the sold out weekly Ibiza Rocks Area 10 residency this summer. The Area 10 label will start releasing some of its own repertoire this coming year.