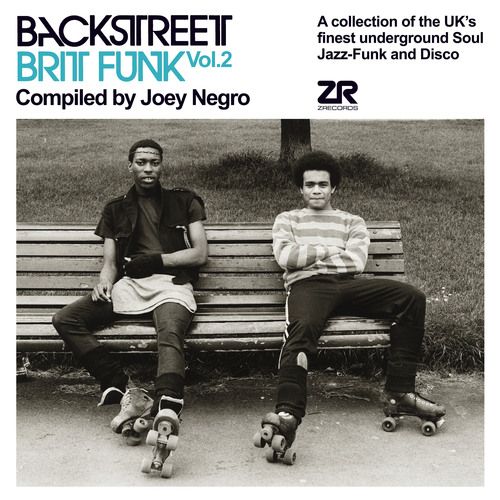 Z Records continues its commitment to unearthing the obscure and long forgotten tracks from the last 40 years with the much-anticipated follow up to Backstreet Brit Funk. Volume 2 has been eight years in the making and continues to showcase the best of the genre from the late 70s to early 80s, compiled once again by Joey Negro.

Brit Funk is perhaps one of the UK’s most under-appreciated genres. Emerging in the late 70’s and taking influences from jazz, funk, reggae and pop, by the early 80s it had spread all over the UK. Chart-topping mainstream bands like Wham!, Spandau Ballet and Haircut 100 tapped into the style and sound to help launch their careers, whilst Linx, Level 42, Light of The World, The Cool Notes and Hi Tension were all Brit Funk acts who troubled the UK top 40 with their own singles.

Brit Funk was essentially the UK’s answer to underground disco, with musicians at first imitating and eventually developing the sounds they heard on the US imports that made it across the pond. And like disco, the Brit Funk scene was significant in reducing racial boundaries in the clubs and raising the profile of black and white musicians who worked together.

Back in 2010 Joey Negro complied the first volume of Back Street Brit Funk: a collection of obscure and forgotten gems of the scene that found favour across the board.

“I thought I had it all when it came to Brit Funk and beyond but then again I hadn't been round Joey Negro's had I. A crucial selection from a world that inspired a whole generation of DJs and bands.” Gilles Peterson

The fact that it’s taken eight years for Volume 2 to see the light of day is a testament to the both the obscurity of the records included, and the logistical challenges involved in digitising what started life as vinyl-only releases, with only a handful of 12”s remaining in some cases.

“I hadn’t planned a Volume 2 of BSBF when putting together the first, but after a while, I started to wonder if there was potential for a follow-up. Over the past 8 years I’ve kept my ears peeled for interesting UK productions that for some reason hadn’t come to my attention before.” Joey Negro

It’s incredible how rare some of the records included on Vol.2 are and how diverse the sounds become. Though well over half the album’s material comes from the likes of Touchdown, Rick Clarke and Savanna which have the classic slapped bass-driven Brit-Funk sound that many will be familiar with, acts like Mercy Mercy, AD 2000 and Veira Crew were releasing a little later in the scene’s evolution, employing drum machines and resulting in more synth-based records. Paul Bailey Sound and Eastbound Expressway were earlier acts, experimenting with the disco sound, whilst ICQ is a classic early 80s UK jazz dance cut that’s never been released beyond the original white/green label.

So, by mid-2016, JN finally felt there were enough tracks worthy of a second volume and the long slow, process of tracking down the acts and label owners began. This album contains some of the stuff that came out and some that slipped between the cracks for whatever reason, so if you dig the Brit-Funk sound and want to hear a few songs you’ve maybe not come across before, you’ve come to the right place.”

As always with ZR compilations a lot of time and effort has been spent on creating these masters from the original vinyl resulting in the cleanest sounding copy possible.

CD One
Savanna – I Can’t Turn Away
Rick Clarke – Potion
The Antilles – I've Got To Have You
The Hudsons – Show Me You Care
Paradise – Stop And Think
Index – Starlight
The Oceans – Pacific Dream
Powerline – Watching You
Janet Kay – Eternally Grateful (Unreleased Dub Mix)
Veira Krew – Sexy Lady
AD 2000 – Love Time Machine
Mercy Mercy – What Are We Gonna Do About It?