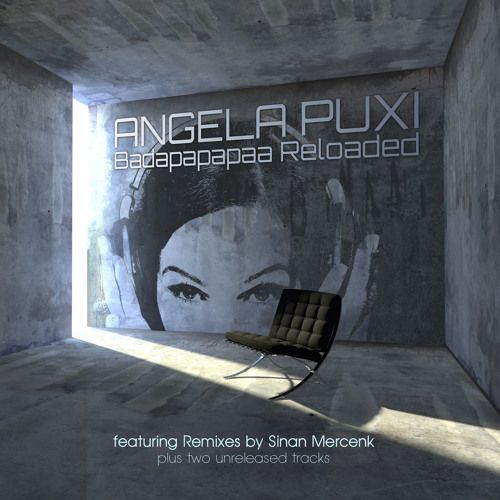 Almost one year after releasing her debut-album "Badapapapaa“, Angela Puxi is back with her new ep "Badapapapaa Reloaded“ providing fans and dj’s with fresh material. DJ/producer Sinan Mercenk has contributed four elegant remixes, plus there are two previously unreleased songs. Whoever likes the combination of jazz and elctronic sounds, as well as surprising twists, should take a listen here.

The opening song is called "You Know“. This euphoric modern groove-track, featuring talkbox-virtuoso Simon Novsky, really makes you want to move and gives you the feeling that the next 30 minutes of the ep will fly by. Then Sinan Mercenk’s laid back deep house remixes roll in. Mercenk’s minimalistic feel for space and time turn out to be the perfect map for putting the original songs, which are well characterized by live-band-sound, into a cool clubby athosphere. As with "Inconvenient“, Angela Puxi’s duet featuring Dennis Legree is a thoughtful but yet positive song about power and powelessness in this world. The original track has reminders of Rare Groove, here it turns into a witty unconventional vocal-house- tune. On "Housing To Jazz“, easy-going beach-house meets The Streets Of San Francisco, and everything is cleverly orchestrated. At the end, the music dives down into a hypnotic "deep sea“-ballad: "Anima“, a subtle poetry about the oneness of soul and universe.

Angela Puxi, co-producer Volker Dorsch a.k.a. Climatic and Sinan Mercenk, they find their inspriration from various musical worlds, and the common thread in "Badapapapaa Reloaded“ is never lost. This many-faceted ep shows how much remix potential there is in Angela Puxi’s songs. It is worthwile, for dramatic compostions’s sake, to listen to it from beginning to end, like a normal album. Typical funk-sounds from the seventies couple with modern club beats, always crafted with juicy details, that always stand far from common fusion cliches.

"I love the power and boldness of her music“ raves Kirk Whalum, a grandmaster of the sax himself, who is wandering between the realms of jazz, soul, pop and whatever you may call it.