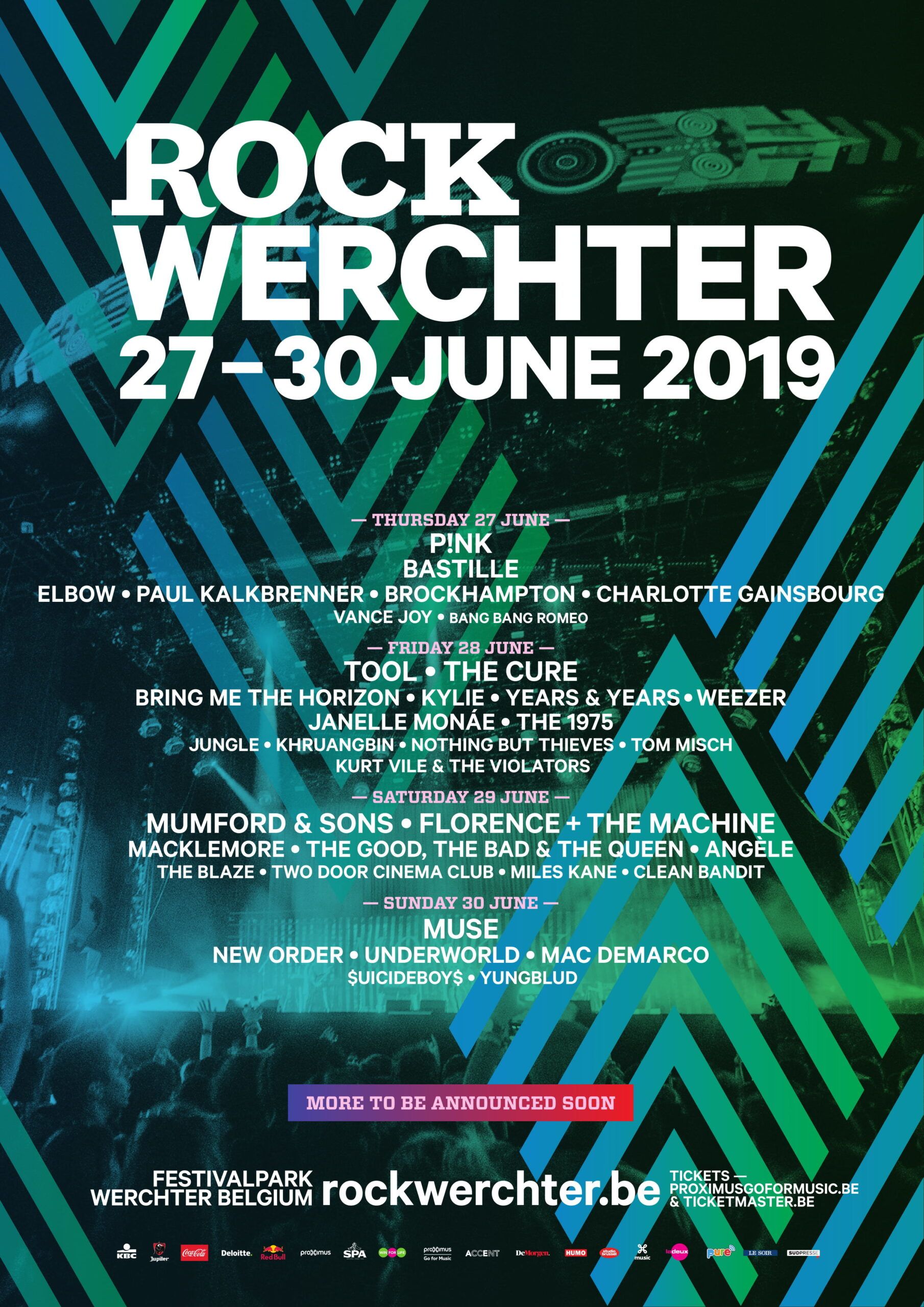 The biggest, and best music festival in Belgium just got better. Rock Werchterconfirm a whole host of mind blowing acts announcing Bastille, Janelle Monáe, Elbow, Brockhampton, New Order, Mac DeMarco, Charlotte Gainsbourg, The Good The Bad & The Queen, Angéle, $uicideboy$ and Khrauangbin. These incredible acts are set to join the likes of globally-renowned headliners Florence and The Machine, Muse, Tool, Mumford and Sons, P!NK and The Cure, and even more contemporary musical delights.

Leading the new additions to Rock Werchter’s Thursday lineup are Bastille. Following their 2012 Rock Werchter KluB C performance and 2014 Brit awards Breakthrough Act win, Bastille are back in Belgium. Since 2014 the band have sold nearly 10 million albums, gained billions of streams on tracks such as ‘Laura Palmer’, ‘Good Grief’ and ‘Happier’ with collaborator Marshmello. Also joining the lineup are Mercury Prize winning Elbow. With a 2018 European arena tour under their belts the band have headed back to the studio to write a new album to follow their previous 6 albums including the multi-platinum, ‘The Seldom Seen Kid’. US genre fusing boyband Brockhampton are a further exciting addition to the Thursday lineup. Following the explosive ‘Saturation’ trilogy and 2018 release of Billboard Number 1 album ‘Iridescence’, the band bring their high energy live show to Rock Werchter for the first time. Rounding out the additions to Thursday’s lineup is French singer Charlotte Gainsbourg. The Beck collaborator and daughter of Serge Gainsbourg will also be playing the festival for the first time.

Janelle Monáe, fresh of her 2018 grammy-nominated album, ‘Dirty Computer’, joins an already stacked Friday lineup. The protege of Prince, who has also collaborated with fun. and Zoë Kravitz also received the Trailblazer of the Year award at the 2018 Billboard Women in Music event. She is also joined on Friday by Texan trioKhruangbin, who bring psychedelic funk sounds from across the globe to the biggest stage in Belgium.

Saturday sees elusive supergroup The Good, The Bad and The Queen perform on the back of their critically acclaimed 2018 comeback album ‘Merrie Land’. Their politically charged sound has kept audiences and critics alike captivated. Mixing commentary on the state of British culture and politics, with eclectic instrumentation, the groups second album took home the coveted Sunday Times album of the year accolade. In addition, returning to Rock Werchter 2019 is the Belgian born singerAngèle who is also set to play on the Saturday. Although originally a classically trained singer, Angèle’s style is much more widely influenced, pulling from r'n'b, hip hop and electronic music to craft her music.

Last but by no means least, Sunday’s lineup also gets a bigger than bitesize boost with the addition of Mac DeMarco, $uicideboy$ and New Order. Canadian singer songwriter Mac DeMarco, with 3 studio albums and a slew of demos and EP’s under his belt, brings what The Guardian describes as his ‘stupendous’ live show to Belgium. Prolific trail blazers $uicideboy$ will also join the lineup. Having seized 2018 with the release of their debut, ‘I Want to Die in New Orleans’ LP, the duo melt equal parts Three Six Mafia and Nirvana into their music. Following the announcement of the re-release of their seminal debut ‘Movement’, British rock and electronic fusion act New Order will also take to the Rock Werchter stage on Sunday. With 10 studio albums, including 3 certified gold, in their catalogue, the groups illustrious career includes Brit and Billboard Music awards and the previous best selling 12” record of all time, ‘Blue Monday’.

TICKET INFORMATION
Tickets on sale now and are available from:
www.ticketmaster.be and www.proximusgoformusic.be