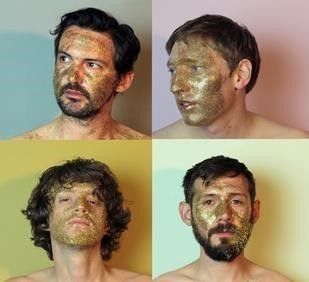 With their new EP due to arrive on Monday (July 14th) Batsch have crafted a new video. ‘Celina’ is delightfully off-piste electronic pop music, and comes equipped with a carefully choreographed clip. Fitting for such an artful combo, lashings of paint are on display with Batsch even stepping in to handle the choreography themselves.

Collar, the second release from the Midlands quartet retains the attention to detail and meticulous approach to pop songwriting that was present on 2013’s Tiles, their debut EP, but they have turned up the heat all the way to “gutter-glamour”, as put by Mason Le Long, Batsch’s singer, guitarist and chief lyricist.

The new Batsch EP is a cold, contemporary, visceral reaction to the sheen and sparkle of classic disco music.  As the only English act on a record label that is primarily devoted to exposing Canadian and American artists in the UK, Batsch have helped establish Tin Angel’s identity as a forward thinking, grass-roots champion of new British music as well.

Much like the music of their favourite artists: Talking Heads, Chic and Fela Kuti among others, Batsch’s songs tend to be “groove-based”. However, the Batsch groove is a deep and carefully carved groove. This groove is a complex and considered one and its delivery is deceptively effortless.

With these five tracks, Collar consistently displays the true extent of their creativity and their desire to explore every chasm of contemporary pop. In ‘Did You Hear About Argine?’ Le Long narrates the bleak tale of an abandoned pregnant teenager over the oppressed and inevitable sound of Joe Carvell’s creeping bass and Matt Rheeston’s leaden drums, laced with icy stabs and chimes of synth from Andy Whitehead.

The steady, infectious shuffle of ’22’ is founded on yet another solid and sincere bass line, punctuated by rhythmic guitar and a breezy, yet purposeful, drum beat. The introspective, lilting melody is as addictive as the head bobbing itself. The song has an innocence about it, which is a recurring theme across Collar. ‘Mirrorball’, another example of this, is a pop song in the truest way imaginable. It sounds like childhood, somehow, if your childhood was spent paranoid, sarcastic and slightly insane.

The modest production of Collar, skirting the edge of lo-fi whilst retaining the clarity and punch necessary for dance floor satisfaction, only heightens its potency.  From the sinister opening swell of ‘Celina’, a mellow and tireless exploration into disco melancholy, to the hypnotic 80s-TV outro of ‘Can’t Tell’, this is a work that bounces with sonic delights and surprises, yet is sparsely arranged throughout; a work whose deceptive simplicity and collected absurdity will undoubtedly be spinning Batsch’s name across all daring dance floors this summer.

Though relatively young, the group has been playing together for some time. Le Long, Carvell and Rheeston were all members of DON’T MOVE!, who released their only record, The New Pop Sound Of DON’T MOVE!, on Tin Angel in 2009. This album earned them much critical praise, as well as festival slots and numerous appearances on national radio. With Whitehead joining them on keyboards in 2013, Batsch is the natural progression of DON’T MOVE!, and they have found a sound that is quite spectacularly unique.