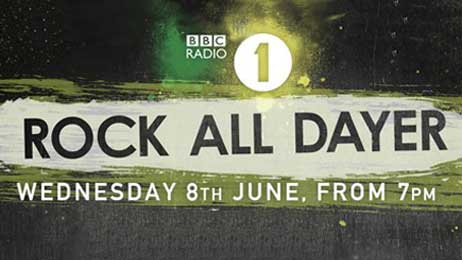 BBC Radio 1 today announced Radio 1’s Rock All Dayer – a full day of rock music on Wednesday 8th June, which will include an incredible line up of bands performing live from BBC’s Maida Vales studios – coming to a climax with a spectacular live show hosted by Daniel P Carter and Annie Mac from 7-10pm.

The day will include live performances from:

Annie Mac says: “I’m really looking forward to doing our annual co-host with Dan and getting some of the most exciting rock bands around to perform at this massive gig for us”

Tickets to attend the live show in the evening from BBC’s Maida Vale Studios are free via a ballot that opens in Annie Mac’s show at 19.45 on the 1st June and closes on Dan P Carter’s show at 23.55 on Sunday 5th June – Visit www.bbc.co.uk/radio1 for more details