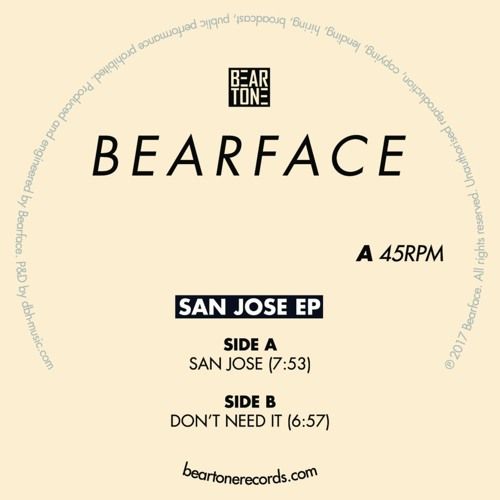 London has long harboured a propensity for clued-in house labels and artists. The latest such act to emerge from the capital is Bearface, the owner of Beartone Records. A producer with a knack for churning out devilishly catchy jams, his is a sound that’s quickly earning favour with both artists and producers alike. On the San Jose EP, he introduces his sound in esteemed fashion, with two equally blistering house jams. Already supported by a diverse cast such as Chris Fortier, Moodymanc, Mr.Tophat, Joris Voorn, Shir Kahn, Wankelmut, Charles Webster, Jimpster and Mark Farina, the release is filled to the brim with ass-shaking good time vibes – and is sure to go down a treat wherever it’s allowed out of the bag.

Opening matters is the sound of the title track, “San Jose”. A rollocking rollercoaster of a track, it moves with a real swagger and panache that’s hard to shake. Imbued with some clever, indecipherable vocal stabs and a sporadic vocal flourish, it’s the sort of heady weapon that can bring the night up a notch still. Peak time fodder with an edge, it’s very much the sound of a producer who’s willing to try something different in the studio.

B side “Don’t Need It” is a no less captivating affair. This time, the thundering 4/4 beats are replaced by a more gentle sound that veers toward deeper planes. Melancholy piano vibes help lift the track to higher planes, elevating the listener to a place of tranquility as they go. By the time the baseline is introduced, we’re already wrapped in the track’s warm glow. Reminiscent of a vintage Larry Heard number, its floaty, ethereal manner is a perfect response to the A side’s more uptempo strands. An EP of stunning effectiveness, Bearface’s latest is nothing if not auspicious.