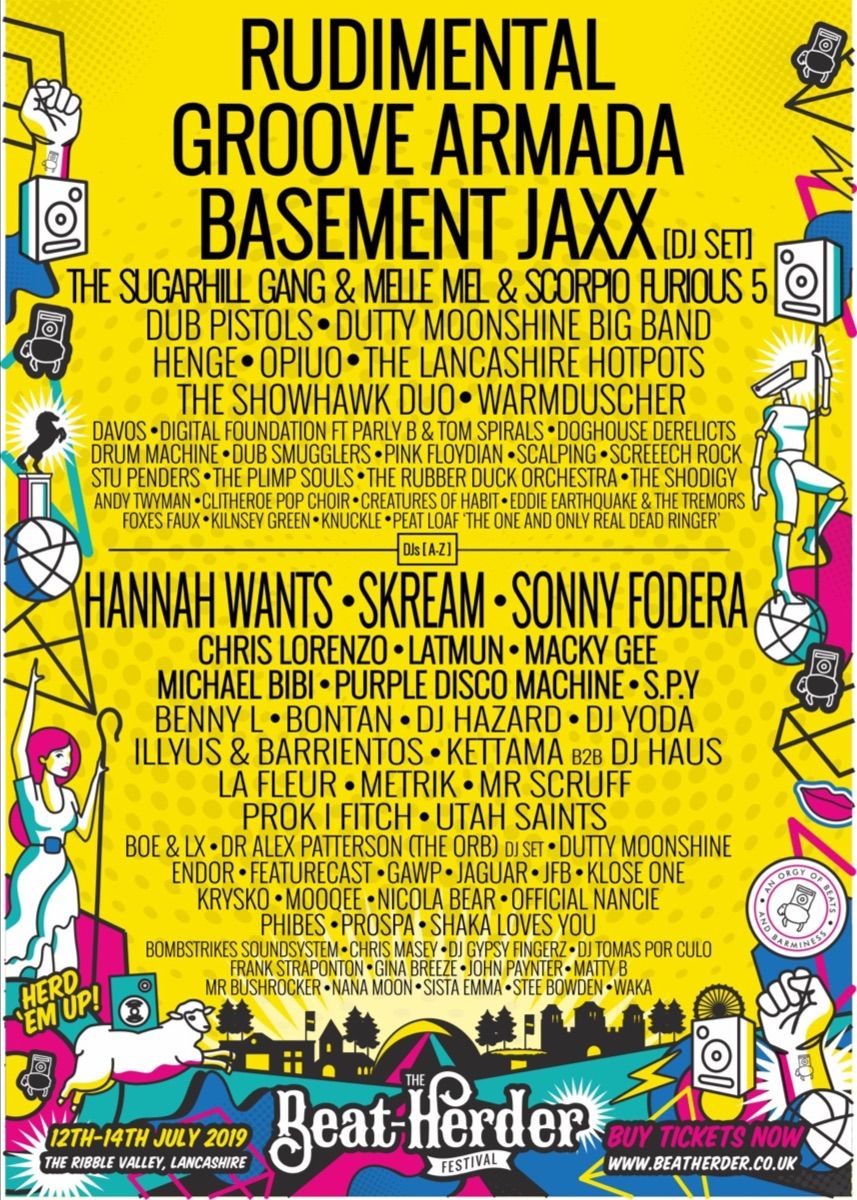 Beat-Herder, the weirdest, wildest and most wonderful party in the UK festival calendar, announces its first names for 2019, running from 12th – 14th July. After selling out of tickets in record time in 2018, Beat-Herder will once again transform Lancashire’s Ribble Valley into a technicolour party and escapist’s utopia, with an array of 20+ whimsical stages, world-class DJs, live acts & comedians, and surprises aplenty.

Originating from free party roots, over its fourteenth-year history, Beat-Herder has become known as one of the last-remaining, independent bastions of electronic music, featuring drum & bass, psytrance, techno, and house music. Renowned for uniting disparate subcultures, this year’s line-up reads as a celebration of electronic music in its many forms.

Headlining the main stage this year are the dominating Drum & Bass sounds of widely successful British 4-piece,  Rudimental; alongside celebrated dance music pioneers Groove Armada, whose 15 year career has been marked by huge singles 'Superstylin' and 'I See You Baby' and phenomenal worldwide success. They're joined by dance legends Basement Jaxx (DJ set), who rose from underground house music sensations to chart-topping, BRIT-award winners, with huge dance floor-pleasers 'Romeo', 'Where's Your Head At?' and 'Do Your Thing'.

Seminal hip-hop group The SugarHill Gang & Melle Mel & Scorpio Furious Five also join the party at the main stage, alongside eclectic, extraterrestrial beat-makers Henge;14-piece live spectacle Dutty Moonshine Big Band; and local favourites The Lancashire Hotpots. The hugely popular electronic band Dub Pistols have been tearing up festival stages for 20 years; and Opiuo will be bringing his ghetto-funk live show to the Ribble Valley, amongst many more to be announced.

Confirmed for the Toil Trees stage, a majestic woodland setting and the beating heart of Beat-Herder, revellers can expect the bass-orientated, garage-influenced sounds of DJ/producer Hannah Wants; a dubstep pioneer and one of the UK's best loved selectors Skream; and Australian upstart Sonny Fodera, who is best known for his technical wizardry on the decks. Joining them are Solid Grooves label boss Michael Bibi;  DJ Mag's breakthrough producer Latmun; Swedish DJ/producer and Power Plant Records label honcho La Fleur; and prolific producer Purple Disco Machine, whose massive hit 'Dished (Male Stripper)' had everyone dancing all Summer long in 2018; all set to grace this legendary stage.

Reflecting the Ribble Valley’s mystic heritage, The Ring pays homage to John Pratt – a mysterious local enigma who was said to possess the strength of ten men. A 100 foot diameter earth mound accessed via a huge Stonehenge-style entrance, it is the perfect venue to capture the original stadium house innovators, and venue hosts, Utah Saints,whose sampling of everything from Eurythmics to Kate Bush made them one of the genre’s earliest crossover sensations. The very impressive, innovative D&B DJ Macky Gee will take to the decks with a heavy dose of bass; as well as Hospital Records' DJ Metrik who will be bringing his high-end D&B production to rock The Ring. Combining tight beats and earth-quaking baselines, DJ Hazard also joins the party, alongside multi-instrumentalist, DJ and singer Official Nancie, and the Annie Mac-tipped Leeds duo Prospa.

The Factory is a split-level arena in which you can clock in, but never clock out. Looking a little like Studio 54 transported 40 years into the future and 3500 miles east, this year it hosts The Showhawk Duo, the celebrated guitarists break convention, blurring the lines between acoustics and electronic music. The Shodigy take to the floor with their retro dance party – expect a 90's extravaganza! While unconventional post-punk supergroup, Warmduscher, whose members include The Fat White  Family, Paranoid London and The Moonlandingz, inject the rock n roll and a wildly-acclaimed energetic show; sample king DJ Yoda will be bringing his famous turntables and live AV-spectacular show to life.

Music is just part of the experience at Beat-Herder. Entirely handmade from scratch, the stages stand out as something truly different in the increasingly identikit festival landscape. That attention to detail creates an immersive world full of beguiling and intriguing creative concepts. Which other festivals give you the opportunity to explore underground tunnels, dance to drum and bass in a chapel or get inked in the functioning tattoo parlour? And if the hedonism gets a little too much, guests can slow the pace by lounging in the heated hidden swimming pool, sitting by the huge fire in the stone circle or enjoy some retro entertainment at the site’s very own working men’s club.

Tier 1 and 2 tickets have sold out. Tier 3 tickets are now available for £150.00 plus booking fee from https://tickets.beatherder.co.uk/. Tickets can also be purchased via monthly or 15-week payment plans. Glamping options are also available. The Beat-Herder Bombassador programme is also open, allowing loyal fans the chance to get free tickets and money-can’t-buy experiences.