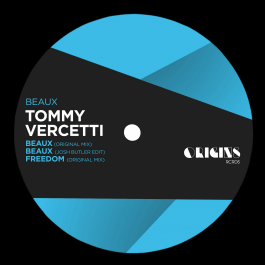 Rising UK talent Tommy Vercetti makes his debut appearance on Origins Rcrds this August to deliver ‘Beaux’, whilst label boss Josh Butler steps up to turn in an impressive edit.

Regarded by many as an emerging artist with musical maturity beyond his years, Tommy Vercetti has become one of the latest names to take note of within the UK, with appearances at the likes of Studio338, Egg London, and Sankeys Ibiza in the last 12 months alone. Releasing on key labels including Do Not Sleep, MadTech and Glasgow Underground, Vercetti has quickly garnered support from leading figures including Roger Sanchez, Sidney Charles and most importantly Josh Butler, who welcomes him to his Origins Rcrds imprint this August to join the likes of Kerri Chandler, Nick Curly, Bontan and Huxley.

Opening proceedings, title track ‘Beaux’ reveals a laid back production full of rich textures and bright synth licks, whilst tracky drums and bumpy sub hits guide the production along effortlessly. Next up, label boss Josh Butler steps up to rework the title cut in style, laying down a series of trademark stabs and hypnotic pads throughout, before ‘Freedom’ concludes the package as hooky vocals combine with skipping hats and snare, airy chords and shuffled percussion patterns to punctuate yet another impressive release on Origins Rcrds.

Tommy Vercetti ‘Beaux’ is out on Origins Rcrds on 24th August 2018.