Peter Czak - Before The Rise 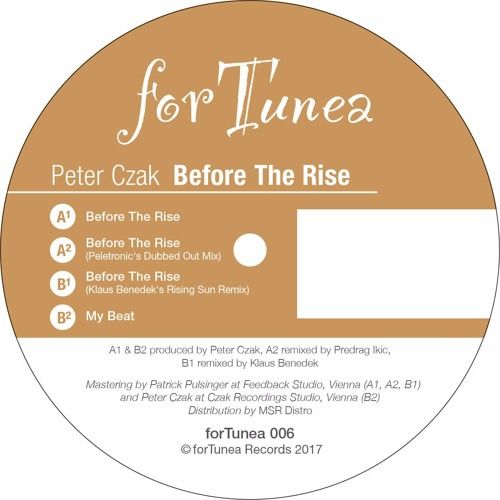 Peter Czak - Before The Rise

Austria’s forTunea Records unearths deep and driving breaks with Peter Czak’s “Before the Rise” in both digital and vinyl formats. With a nod to elements of Detroit progressive techno and emotive, trance-like synth lines of late ‘90s production, the driving beats of “Before the Rise” build to increasingly syncopated breakbeats. Peletronic remixes the track with moody, percussive dub, while Klaus Benedek’s “Rising Sun Remix” is a heavily rearranged version with sunny congas. Finally, “My Beat” is a layered synth track heavy on drum machine rhythms.

Peter Czak is a DJ, event organizer and producer whose work and interests span genres house, techno, ambient, nu-disco and downtempo. His “Before the Rise” EP will conjure memories of classic Detroit and electronic music’s foundations at the intersection of disco and house music. Give it a spin and be transported through decades of innovation.