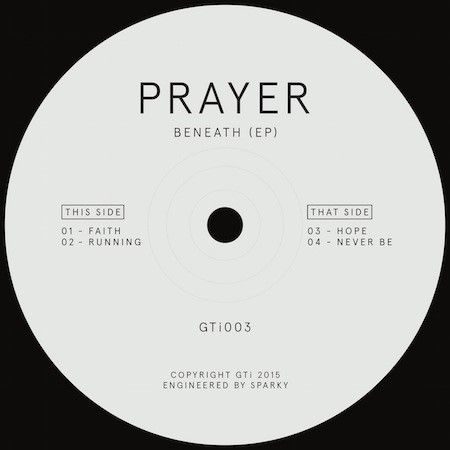 After almost a year of silence, experimental producer Prayer presents his sophomore EP ‘Beneath,’ the next release in line from his vinyl imprint Grade 10. A continuation of Prayer’s efforts to bridge the gap between the classical and electronic worlds, ‘Beneath’ takes Prayer’s artistry to another level across four tracks of contrasting light and dark spaces. Citing his influences as Max Richter, Burial and Philip Glass, Prayer has shown his determination to push the boundaries of modern production within the parameters of classical frameworks.

Out on November 2nd, ‘Beneath’ opens with the other-worldly ‘Faith.’ Built around a percussive heartbeat, Prayer melts haunting samples to create a powerful, moving number with an ethereal quality. Faith shows off Prayer’s ability to breathe new life into vocals, manipulating and moulding samples into new forms. ’Running’ is the EP’s dreamy second track, filled with aquatic, mesmerising sounds that float from beginning to end. Layers of rich, textures meet with an chorus to make Running an r&b-like ballad.

Prayer’s darker side shows in Beneath’s latter half, ‘Hope’ is a six-minute epic that mixes jungle drums with hypnotic sampling and synths, something like organised, heart-tugging chaos. Dense and dark, Hope’s drum arrangements are a nod to Prayer’s deeper understanding of structure and method, listen via THE FADER. ‘Never Be’ rounds off the EP, the most dance-floor friendly offering; it’s also the most reflective of Prayer’s appreciation of film music. Prayer’s classical knowledge shines through Beneath, blurring the boundaries between traditional and electronic method, with a rare ability to trigger emotions in listeners. According to Mixmag – ‘Too good, 9/10.’

One of 8 strong collective Grade 10 International, Prayer has been building the upstart vinyl-only label along with Classic Coke, ForeverForever, 8Ball, Loosewomen, Nokia Boys, Unslaved, and via his other project Kollaps. Since Grade 10’s debut release in May 2015, the group have been turning heads with their uncompromising vision for the future of electronic music, heavily influenced by nostalgic cult genres that have shaped the electronic underground. Focussed on collaboration between members, Grade 10’s purist attitude to production gives them a DIY quality, and total control over their output.