Bestival Announces Headliners and Much More 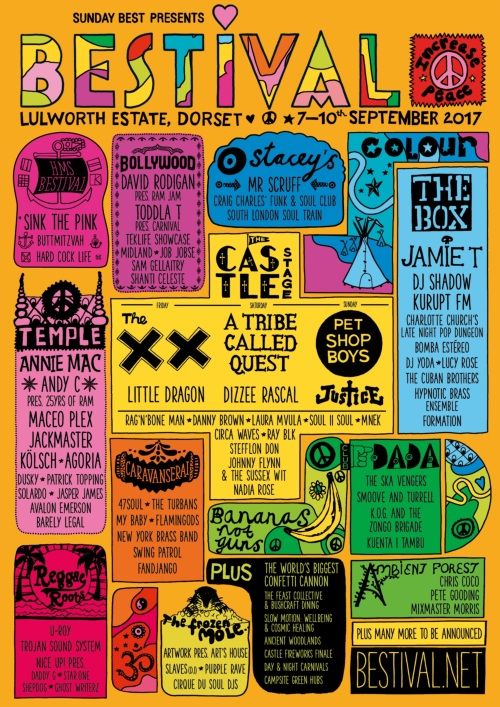 Bestival Announces Headliners and Much More

It’s a brand-new era, so prepare for the truly immersive experience of Bestival 2017. Announcing four incredible headliners and a huge bill of amazing music, we are entering a new chapter of light and sound, exploring the wonders of Colour on our mission to increase the peace this 7th – 10th September at the Lulworth Estate, Dorset.

Rob da Bank says: “Well what an adventure this promises to be… we have a beautiful new home with a massive castle in the middle of it, acres of beautiful woodland and forest, a sea view and the dramatic Jurassic coastline. Going back to our roots with Josie da Bank’s hand-drawn artwork, reviving all our favourite stages from 14 years of Bestival history and going out with all our headliners for the first time ever together, we’re pretty excited at Bestival HQ. From pop to grime, hip-hop to techno, folk to classical and every style in between we are reclaiming our place as the funnest, most adventurous, musically savvy and downright magical festival on the map. Please come along for the ride. and remember Increase the Peace”

We are honoured to say that The xx will be the first ever Castle Stage headliners at Bestival! Never anything less than breath-taking, we can’t think of a more fitting band to get the main stage action underway in our new home.

Commenting on their headline performance, The xx said: “Bestival was one of the first festivals we played, back in 2010, and it had always been a dream for us…we even begged to play the previous year. In 2012 we returned to play the main stage and we’re so happy to say we’ll be headlining this year, at the new site in Dorset. The Isle of Wight will hold a special place in our hearts but we’re excited to bring our new show to their new home”.

Guaranteed to be momentous, we are extremely excited indeed to announce that hip-hop heroes A Tribe Called Quest will headline Saturday at Bestival 2017, performing what will be their last UK Show.

Bringing our debut mainland Bestival to a suitably triumphant close, we are completely over the moon to announce synth-pop geniuses Pet Shop Boys as our Sunday night headliners. Quite simply legends, we think they’re the perfect band to bring some mind-blowing colour to our first Lulworth Estate finale!

Commenting on their headline show, Pet Shop Boys said: “Amazingly it is over ten years since we last played Bestival but we remember it being one of the most enjoyable festivals ever. Looking forward to bringing our new show there this year – and seeing how the audience has decided to dress up!”

And completing 2017’s fantastic foursome of first-time headliners we are delighted to announce Wimbledon’s finest, Jamie T will be the man kicking it all off with an exclusive performance topping the Thursday night bill on our second stage, The Box.

Redrawing our favourite party in the spirit of its original pioneering vision, Bestival’s creative essence will explode before your very eyes with a cavalcade of brilliant new stages, incredible destinations and stone cold classics, including our brand new main stage The Castle Stage, the eclectic wonders of The Box, the hands in the air nirvana of Temple, Bestival’s heart and soul, Bollywood, and the righteous vibrations of Reggae Roots.

Back by very popular demand HMS Bestival is the last word in off the hook partying, plus you can dance like there’s no tomorrow in new venues The Frozen Mole and Stacey’s, delve into the vintage madness of Caravanserai, and Club DaDa, and kick back in the enchanting Ambient Forest, and at our steam punk vision, Oberon’s Observatory.

Celebrating the move to our new home at the Lulworth Estate, we are offering a couple of special one-off ticket deals. For the next 48-hours only (that’s from 7.30am Thursday 9th February to 7am Saturday 11th February) you can grab your Bestival weekend ticket for £150 (plus booking fee), or £190 (plus booking fee) if you want to throw in coach travel from Birmingham, Brighton, Bristol, Cardiff, London, Newport (IOW), Oxford, Portsmouth, Reading, Ryde or Southampton. These deals are only available from Ticketline so, what are you waiting for? Grab your ticket now!

There are still plenty of treats to be revealed so head to www.Bestival.net