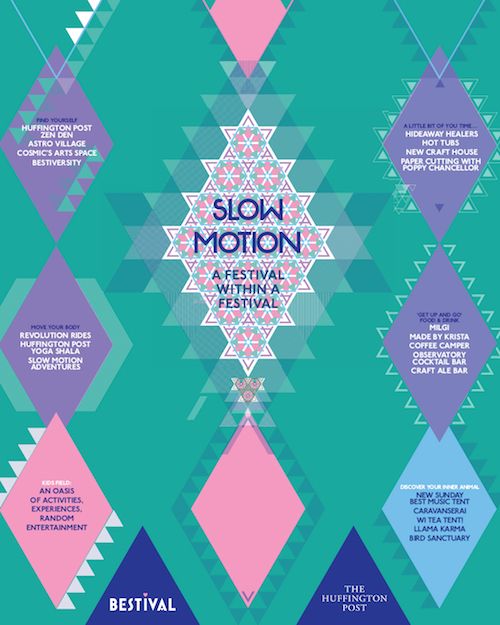 The launch pad for a halcyon journey that will help us live our lives more fully, Slow Motion is an enlightened festival within a festival. A serene realm of wellbeing overlooking Bestival’s elysian fields, it’s a sign post to The Future, giving you a chance to breathe while stepping into a more horizontal escape, guiding you to your own natural euphoria, this coming 8-11 September on the Isle of Wight.

Rob da Bank says: “Slow Motion nailed it in its debut at Bestival last year – and did just what we wanted, providing an alternative space to get away from the hedonism for a while and rediscover yourself and your mates and festival family in a relaxing escape. Everyone loves a big party but we like to look after ourselves at Bestival too, and with everything from the amazing Revolution Rides’ spinning raves to meditation, yoga and the re-energising joys of The Hideaway Healers through to full on surfing action and The Huffington Post UK’s new Zen Den, this is the place to put the good stuff back in… Then to party!!”

Focusing on the self, head to Bestival’s summit and step back from the melee in The Hideaway Healers’ Pamper Paddock. Select a therapy to re-energise both mind and body from a choice of Reiki, Shiatsu, Holistic or Thai Yoga Massage, or talk with our team of qualified therapists to tailor a treatment to your needs to give things a bit of shake-up.  Indulge in the decadence of Bathing Under the Sky’s revitalising Hot Tubs, which you can book right now, unchain your creativity and oblige your tie-dye yearnings with Hannah and Rosie at The New Craft House and try your hand at some therapeutic Paper Cutting care of Poppy Chancellor.

Cleanse the sins of the night before with The Revolution Rides. Created especially for Bestival and one of last year’s biggest hits in Slow Motion, join the power of music with a pedal-powered workout led by all round motivator and Olympic sports coach Tim Weeks. The HuffingtonPost UK Yoga Shala is the place to re-centre yourself with a variety of yoga from Acro to Kundalini, and Hip-Hop Yoga to Voga. This year’s yoga programme features an awesome line-up of headliner yogis such as Felix Price and Diahann Holder of the Urban Avatars who have been brought to us through our friendship with Yoga Connects Festival, Acrobalance with last year’s flying superstars Pip & Eugene, and a very special visit from Goldie introducing Yoganster to the yoga massive! You can also head off site for some Slow Motion Adventures with the Isle of Wight’s iSurf, who will be leading surf and SUP (stand up paddleboarding) exploits for the more daring Bestival-goers!

Feed your mind and find yourself at The HuffingtonPost UK Zen Den. Brand new for 2016, The HuffPost UK Zen Den is a place for soul searchers and those who want to zone in and enjoy some 'me time'.  Expect gong baths, breath meditation with Michael Townsend Williams from Stillworks, Transcendental Meditation with The David Lynch Foundation, Tai Chi in the woods, as well as chanting and guided meditations to ground, balance and connect.   Divine your future with the mystic arts of astrology and Tarot at the Astro Village. Develop your visual vocabulary at Cosmic’s Arts Space, and cultivate your knowledge at Bestiversity.

Undertake a spiritual odyssey at the new Sunday Best Music Tent, brimming with our man da Bank’s restorative grooves, marvel at the wonder of one of the festival world’s most stunning venues Caravanserai, where lounging among the object d’art and repurposed caravans with a delicious cocktail has never been more invigorating, or delight in the simple pleasures of a cup of tea and a slice of cake at The WI Tea Tent. Feel the curiously relaxing contentment of Llama Karma from West Wight Alpacas and wonder at the Island’s ultimate birds of prey experience at The Bird Sanctuary with Haven Falconry.

Nourishing the soul is undoubtedly important but don’t miss out on divine pabulum and real soul food including Milgi’s natural, nourishing and healthy fare, cold-pressed raw juice from Made by Krista, top quality artisan coffee, speciality teas, handmade chai and delicious cakes from The Coffee Camper, appetizing cocktails in the eye-opening tranquillity of The Observatory Cocktail Bar, and the honeyed joys of The Craft Ale Bar.

And creating a utopian space for the party people of The Future in Slow Motion’s enlightened surrounds, The Kids’ Field will be an oasis of activities, experiences, random entertainment and a full programme of theatre shows, circus skills and crafts and games!

It’s all good clean fun, so don’t miss out on Future festival times at Slow Motion. And, if you missed its debut in the Summer of Love, check out the Slow Motion film and begin to cultivate your mindful awareness.

There are still plenty of treats to be revealed for our Future paradise, including our Sunday night main stage headliners and much more, so head to www.Bestival.net, Facebook, Twitter, Instagram / Tumblr