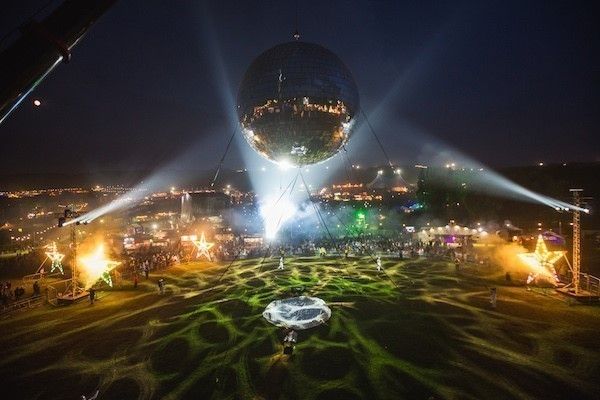 It’s been the centrepiece of the Magic Meadow throughout Bestival’s four-day Desert Island Disco jamboree, and now we are utterly ecstatic to declare that our frankly magnificent disco ball has set a new GUINNESS WORLD RECORDS title! Topping the tape at 10.33 metres, the dazzling disco beauty is as high as a three storey building, is covered in 2,500 mirrored tiles that would stretch out for a kilometre if you laid them end to end, and is filled with 350 cubic metres of air; equivalent to one thousand beach balls!

Verified by Mark McKinley from GUINNESS WORLD RECORDS the Disco Ball was measured by surveyor Ollie Salter at midday on Sunday (7th September), before clinching the record when it was raised and spun, with a suitably disco-tastic light show, at the start of Chic featuring Nile Rodgers’ epic finale set on Sunday evening. And now we’re very proud say that Bestival holds the GUINNESS WORLD RECORDS title for the Largest Disco Ball.

Rob da Bank said: “We love a challenge at Bestival, so when Nile Rodgers asked us to do something spectacular we knew it had to be beyond amazing. We don’t do things by halves, we get immersive and take them head on, so we’re very proud to have cracked the world record. Our Desert Island Disco has been utterly incredible, and to top it all off with the GUINNESS WORLD RECORDS title for the Largest Disco Ball is the best feeling ever!”

Official GUINNESS WORLD RECORDS Adjudicator Mark McKinley said “I’ve had a professional surveyor measure the disco ball, I have verified the measurement and can reveal it is 10.33 metres in diameter.”

Disco legend Nile Rodgers originally laid down the gauntlet and asked Bestival to create the world record breaking disco beauty to accompany his hit-packed and exclusive Desert Island Disco set. Relishing the challenge Josie and Rob da Bank sought to pull together a crack team to build the Disco Ball with cool creatives NEWSUBSTANCE and their top man Mungo at the helm. Aiming to top the previous record of 9.98 metres, Bestival’s creative crew have surpassed themselves and bagged a new GUINNESS WORLD RECORDS title!

Capping what was undoubtedly the greatest Bestival of all time, the GUINNESS WORLD RECORDS title for the Largest Disco Ball is a dream come true for the Bestival crew and our proudest moment so far. Roll on 2015 for even more boundary busting behaviour!