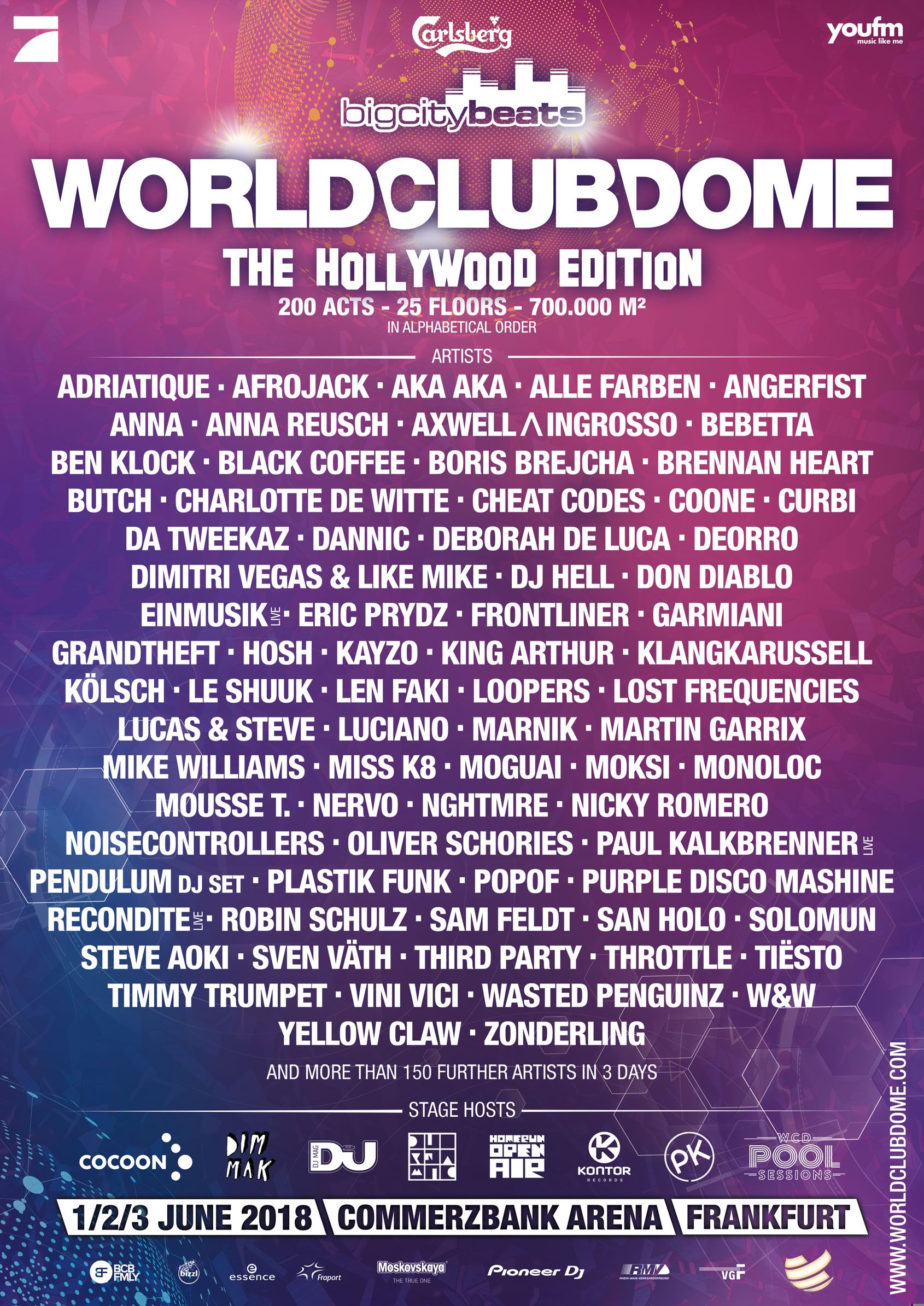 BigCityBeats, the pioneering brand known for generating completely unique and extraordinary events, are back with their annual WORLD CLUB DOME event, “The Biggest Club In The World”, running from June 1-3 this year at the Commerzbank-Arena in Frankfurt, Germany. This year’s event is set to be the biggest yet, with over 150,000 electronic music fans set to attend over the unforgettable weekend. In excess of 200 DJs will travel from every corner of the globe to perform at the legendary event. Headliners include the world’s No.1 DJs of recent years, Martin Garrix, Dimitri Vegas & Like Mike and Tiësto, hard hitters such as Steve Aoki and progressive techno giant Eric Prydz as well as House and Techno dons Solomun, Sven Väth, Ben Klock and many more.

For the first time ever BigCityBeats WORLD CLUB DOME is adding a slogan to its famed event: The Hollywood Edition. Over the weekend “The Biggest Club in the World” will meet the Hollywood dream factory – a duet between BigCityBeats and Hollywood glamour, tied together in perfect harmony to generate an out-of-this-world atmosphere. Guests will be greeted with a red carpet entrance on arrival, top-calibre headliners will be transported to and from the event via helicopter, and celebrities from far and wide are expected to attend the event, bringing the Hollywood experience to life over the famed weekend. The Hollywood Thrill Area will have bumper cars and break-dancers while models will compete on the WCD catwalk. Last but not least, the VIP Bambi Beats after-show party will fuse club beats and Hollywood glamour.

Among the dizzying array of stages at the event this year are the Hardstyle Zombie Stage, Trap & Bass Skyline Stage on Saturday and House at the Skyline Stage on Sunday as well as the WCD Pool Sessions which will be hosted by Solomun and Sven Väth and their DIYNAMIC and Cocoon labels at the breath-taking woodland swimming complex in the Stadionbad. The famous Dorian Gray 2.0 will also open its doors at the event, spread across 3 floors in the arena.

The run up to BigCityBeats WORLD CLUB DOME has been awash with extraordinary events, including WORLD CLUB DOME AT SEA that took 2,000 partygoers on a journey across the Mediterranean with DJs playing across 7 floors. The groundbreaking ‘Zero Gravity’ missionon February 7th, with support of the European Space Agency (ESA), was the first zero gravity nightclub in history and created a global media frenzy, with Steve Aoki and W&W providing the soundtrack to a custom Airbus A310 as it performed parabolic manoeuvres creating periods of weightlessness for 50 lucky passengers. BigCityBeats WORLD CLUB DOME also expanded to Korea with 100,000 attending its edition at the Incheon Munhak Stadium in September as WCD announces it will also make its debut in China in 2018.

After a Boeing 757 and a 747, BigCityBeats is now adding an Airbus 340 to its fleet of jets, creating the “biggest private club jet” the world has ever seen. The specially modified jet has two DJ Areas and will fly lucky competition winners to the main WCD event in June, soundtracked by W&W, Alle Farben and Le Shuuk. A high-speed inter-city train will also be converted into the BigCityBeats ICE Club Train offering clubbers a dancing venue from Cologne to Frankfurt at 200 miles per hour and 130 BPM on June 1st, hosted by Germany’s house legend Mousse T.

2018 marks the 6th year in a row of BigCityBeats WORLD CLUB DOME in Frankfurt. The event grows exponentially in size and renown year after year, presenting some of the best-known talent from around the world to crowds that are now exceeding 150,000. This year WCD are pulling out all of the stops, and are sure to set a new standard for electronic music events around the planet because this is not a festival – it is the biggest club on earth.