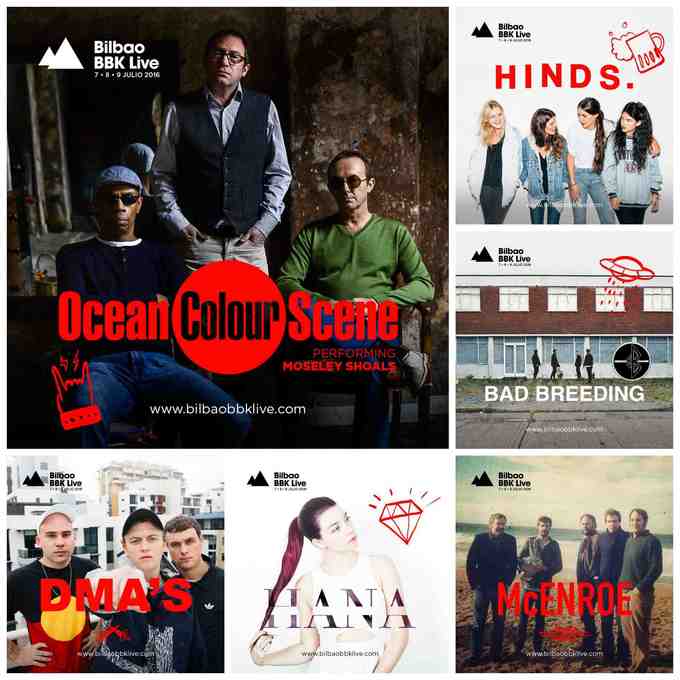 One of Brit Pop's earliest and most popular bands, Ocean Colour Scene, are set to visit Kobetamendi with an exclusive festival performance and their only date scheduled in Spain. The legendary band will perform their second studio album ‘Moseley Shoals’ (1992) which sold over a million copies and led to the band's international success from start to finish to an eagerly awaiting crowd at Bilbao BBK Live this summer!

Since bursting on to the Madrid DIY scene, Hinds have polished the raw and rowdy sound that marks their unique and personal brand. The indie quartet quickly caught the attention of international audiences having released only a couple of singles. Now, having recently released their highly anticipated debut album ‘Leave me Alone’ the girl gang are certainly one of today's most promising talents and are not to be missed at this years festival! Having just released their debut LP ‘Hills End’, the 90’s brit pop obsessed DMA’s have quickly gone from home-recorded demos to selling out shows in Australia and touring the world. Influenced by the likes of Oasis and Happy Mondays this Aussie revivalists trio are a welcome addition to the lineup for 2016.

Hailing from the council estates of Stevenage, Bad Breeding have gained a reputation for their noisy, explicit punk sounds and their incendiary live shows. The British punk quartet have been described by The Guardian as one of “the best new punk bands in Britain” expressing themselves and what they stand for through the music they play. Their explosive, gritty live show will certainly be one to remember on their first visit to Bilbao BBK Live.

Hana is Lorde, Lana del Rey and Grimes’ musical obsession. So much so, she has already shared tours with the last two. Melancholic and delicate, Hana will visit Bilbao BBK Live to present her self-titled EP, released last march. Raised in Getxo, Spain and considered one of the best indie bands in the Spanish music scene, McEnroe will return to Kobetamendi with their poetic, heartfelt latest album, ‘Rugen las flores’ (2015).

Heineken® will collaborate with Bilbao BBK Live for yet another year. Reaffirming the brand’s commitment with live music and as an example of events that set trends.