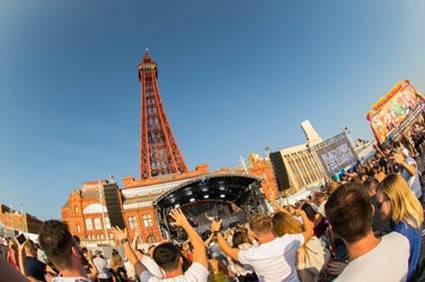 Following its successful debut on the Tower Festival Headland on Friday 6th – Sunday 8th July, Blackpool Festival has announced that it will return in 2019 with its three-day extravaganza from Friday 5th – Sunday 7th July. Organisers have revealed that it will bring back its old skool DJ lineup on the Saturday, hosted by Back To The Old Pool, and that the Sunday family offering, Party On The Prom, will also return. Blackpool Festival has confirmed that the Friday lineup will take a new direction of which the programming will be revealed later this year. Early bird tickets for the Saturday only are now on sale from www.skiddle.com for £40 plus booking fee, while lineups and ticket info for the rest of 2019 will be announced soon. Keep eye on www.blackpoolfestival.co.uk for further announcements.

"We are delighted at the response to the festival. The atmosphere across all three days was pretty special and the weather certainly played a big part! We know we have a core crowd of ravers who return each year for the 'Back To The Old Pool' dance element, but the feedback from families who attended 'Party On The Prom' on Sunday told us there's a demand for this type of event in Blackpool.

There is always room for improvement, especially for a first-year festival, and we've listened to everything our customers have said. With this in mind, we're looking to tweak a few things next year and we will be returning bigger and better in 2019 and with a new Friday programme. We can't wait to reveal our news in due course".

Under the blazing sunshine and with views out to sea, Blackpool Festival 2018 attracted crowds of over 3,000 who rocked up to attend one of three different days of programming. Friday showcased the best in current and legendary DJ talent, including a Lancashire exclusive from Example, a Faithless DJ set, and performances from Blackpool’s Danny Howard (BBC Radio 1), Roger Sanchez, Pirate Copy, Mason Maynard and many more.

Saturday saw the ever-popular Back To The Old Pool throw one massive rave on Blackpool’s promenade.  Clubbers danced all day long to stand out sets from the likes of Erick Morillo, Stu Allen, Paul Oakenfold, Todd Terry and tons more across four stages and a VIP arena hosted by Hed Kandi. After the sun went down, Judge Jules played an epic set to close with hands reaching to the stunning heights of the illuminated Blackpool Tower.

Party On The Prom led the way on Sunday as Blackpool’s first one-day family festival.  Kids of all ages enjoyed a sing-along with CBeebies’ Andy Day and his Dinosaur Raps where Dads were pulled from the crowd to join him on stage; meet and greets with TV favourites Peter Rabbit™ and Peppa Pig Story Time and baking and drumming workshops. Parents took the little ones dancing to Raver Tots with DJ Slipmatt and Judge Jules, and wrapping up the weekend was A Taste Of Little Mix who belted out the band’s best songs to a sea of smiling faces.