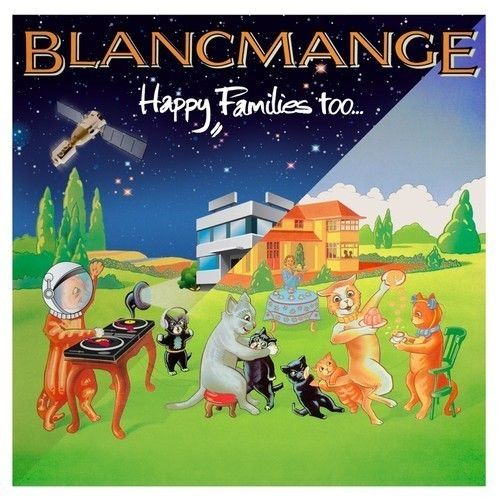 Re-imagined and re-recorded: the landmark 1982 debut is to be performed in full during a November 2013 tour, with the new album available exclusively at tour venues.

For the first time ever, this tour will see Blancmange taking the album to the stage in its entirety. And, never one to stand still, Neil Arthur has given the songs that won such popular acclaim three decades ago a thoroughly 21st century spin, with a fresh look at an album that influenced so many.

To offer fans a new experience, ‘Happy Families’ has been specially re-recorded by Blancmange and rechristened ‘Happy Families too…’ The new physical album, with updated artwork, will be available as a tour exclusive.

A later deluxe version including a mini tour poster and full reveal artwork will be launched at a later date to coincide with a download release, which will make the whole of Happy Families too… available digitally worldwide for the first time, however the tour will be the only place for fans to get their hands on a numbered limited first edition hard copy.

Neil refers to the new versions, which include fan favourites ‘I Can’t Explain’, ‘Waves’ ‘Feel Me’ and the Top 10 hit ‘Living On The Ceiling’ – as an “interpretation”. “I just wanted to approach the songs using today’s technology,” he says. “Every time we perform it’s a different interpretation. So rather than just dust off the old songs, I wanted to bring something fresh to the project and make it a contemporary reworking rather than an exact imitation.”

Due to continuing health issues, Stephen Luscombe will be unable to join Neil on the tour. However, Neil will be joined for the entire list of dates by guitarist David Rhodes, who performed on the original album, and sound engineer Adam Fuest, a long-time collaborator who will be manipulating the live sound and visuals.

“The intention is to do something a bit like Roxy Music did with Brian Eno processing sounds live during a performance,” says Neil. “It might be less predictable, it might even be a bit chaotic! But I like the excitement of that, the chance element – the feeling I’m moving forward creatively.”

Eccentric musical pioneers, Blancmange melded a unique sound, bringing together electronic and eastern influences with a distinct dance floor sensibility. The resulting album, ‘Happy Families’, with its mixture of theatricality and sincerity won them a legion of fans.

From their origins making experimental synth wave, to the chart-topping yet cool and credible hits, Blancmange were at the very heart of 1980s club culture, from support slots with Grace Jones, to killer 12” remixes by the likes of John Luongo. Their tracks were on regular rotation in sweaty nightclubs from New York, to Berlin to London, forming part of sets reflecting the open minded “as long as it moves the floor” policy of the time, that would see their records blended seamlessly with disco, post punk, EBM, new beat and early house. Their music also sat with equal comfort alongside both the synth pop of piers OMD or Human League and leftfield cult figures like Cabaret Voltaire or XTC and was undoubtedly popular with many of the leading electronic music pioneers worldwide. Predating the acid house explosion and the many subsequent sub genres, Blancmange’s music is a key cornerstone in the musical landscape that shaped both the original electronic music boom and its huge lasting legacy.

Their influence on the past few years’ slew of electro revivalists like La Roux, Hot Chip and Metronomy has been well documented, but of equal note is the likelihood that anyone partying from Dalston, Peckham, Brixton and beyond in recent times is likely to have heard Blancmange tracks fitting perfectly into sets by hip party selectors proffering cold wave, Balearic, electronic oddities, cosmic disco, house and even techno.

With their 2011 album ‘Blanc Burn’ having won critical acclaim, and the lasting legacy of their still-fresh past output, the time is ripe for yet more Blancmange action.

The tour begins on 3rd November in Clitheroe, Lancashire, finishing in Dublin on the 21st November. Tickets are on sale now from all major outlets priced between £16 and £22.50.