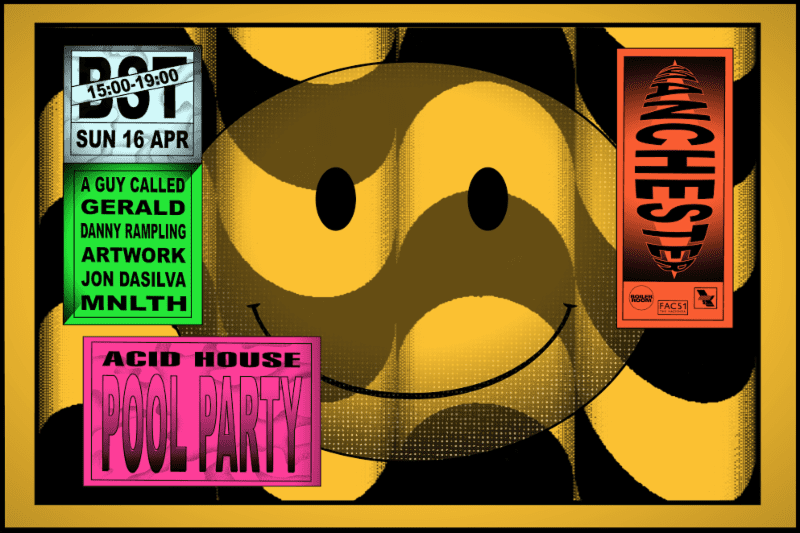 This Easter Weekend, The Warehouse Project are joining forces with Boiler Room and Fac 51 The Hacienda to bring an acid house special in the genre's spiritual homeland of Manchester.
On Easter Sunday, they'll recreate Tony Wilson's 'The Other Side of Midnight' (OSM)  – an acid house pool party filmed in Manchester's Victoria Baths and broadcast on national TV in 1988. They'll be filling up the same pool for the first time in 30 years, and bringing the acid house magic of OSM back to life.

The pool party will run from 3pm-7pm on Sunday 16th April. Request an invite here – blrrm.tv/pool, or you can watch the live stream on Boiler Room via the following link: blrrm.tv/acidhouse.
See you in the pool and don't forget your Speedos!

Before the Speedos are donned, on Saturday The Warehouse Project and Boiler Room are taking over Gorilla for another celebration of all things acid.

While those that made it popular came from Manchester, the masterminds behind the genre's conception came from the home of house music, Chicago. Tyree Cooper, the Awesome Duper Super Trooper, was at the forefront of this revolution, the legend will be spinning this Saturday, alongside live sets from Ceephax Acid Crew and Posthuman, plus burgeoning talent Steven Simpson completes the Saturday bill.

Remaining tickets are available here – blrrm.tv/whp, or you can tune into the live Boiler Room stream via the following link – http://blrrm.tv/acid