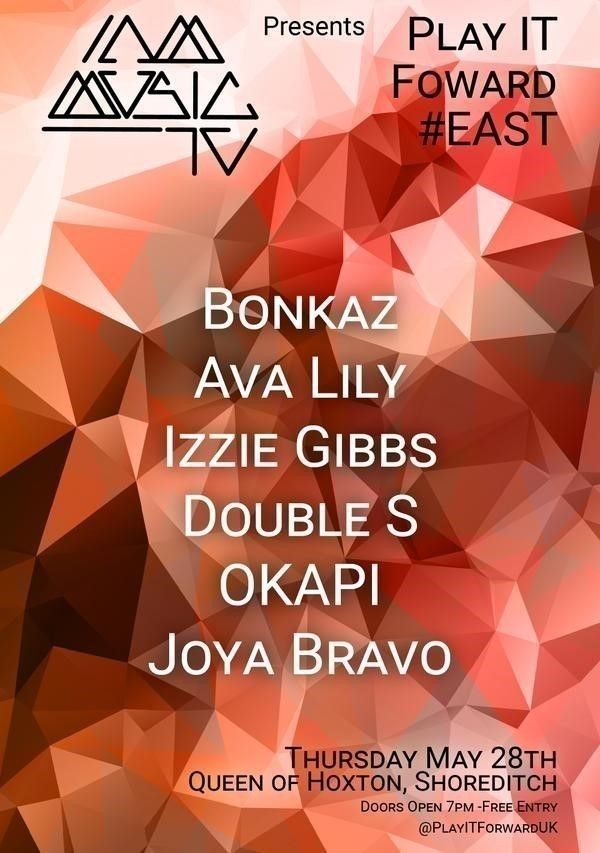 #PIFEAST returns to the Queen of Hoxton on Thursday 28th of May for yet another instalment of epic live music music and wild scenes. You’ll witness each artist performing some fiery live sets alongside a few impromptu collaborations between the lineup. Hold tight…

Bonkaz, the young Croydon rapper will be travelling to East London to perform his sick new release ‘We Run The Block’. If you haven’t checked this guy out yet, you’re in for a treat.

Ava Lily, one of the first signings to Naughty Boy’s new record label. We’re ecstatic to host one of Ava’s first live gigs in London Town.

Double S, since dropping his latest single ‘Do It Like Me’, he’s received a huge response from the likes BBC 1Xtra’s Charlie Sloth to name just one. He’s bound to kill it on stage at Play It Forward.

Izzie Gibbs, a fearless young grime emcee from Northampton is on route to show London the future.

OKAPI, a band hailing from North London, the lead vocalist will instantly remind you of the legendary tones of Amy Winehouse.

Joya Bravo, coming straight outta New York City with some serious roots in the dub scene. We’ve managed to catch Joya on a short trip to the UK.

Hosting on the night and also DJing we’ve got IAmMusicTV’s Carly Wilford & Shan McGinley. These two have successfully turned the Queen of Hoxton into total bedlam with their DJ sets over the past three months, tomorrow we’re expecting much of the same. The gig is ‘Free Entry’, so no excuses.

If you missed last month, this is what went down…