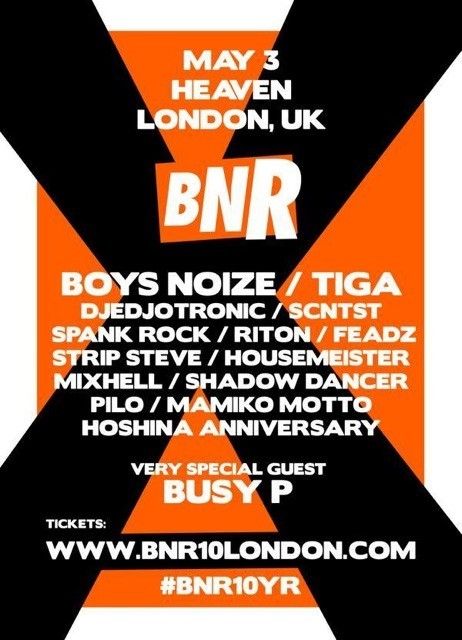 From house to electro to techno, Boys Noize’s outstanding label has pushed boundaries and created something special with every jaw dropping release. With just weeks to go until he celebrates the 10th Anniversary of his seminal imprint with a landmark event at Heaven in London, it’s clear that this philosophy is reflected in this hugely exciting label party.

With twenty DJs playing across three rooms, this will be the ultimate Boysnoize Records label showcase. World class artists will rub shoulders with BNR’s finest new talent, as all pay respect to this dynamic imprint. Fans from all over will be flocking to the event to ensure they get a piece of the action, in what will be the highlight of the May Bank Holiday Weekend in the Capital. Early Bird and Saver tickets to this magnificent celebration have already sold out, whilst standard tickets are now selling fast. With the iconic Heaven set to host this one-off night, make sure you confirm your place today for what will be a mind-blowing occasion for all in attendance…

Having already announced that Boys Noize will welcome the superb Tiga to headline BNR’s 10th Anniversary, we can now confirm that the duo will go head to head in an exclusive UK performance. This coming together of two powerhouses will whet the appetites of both artists and their fans, as they play a very special back to back set in Heaven’s main room.

This year has seen Boys Noize remain in the same brilliant form which resulted in 2014 cement itself as the finest of his career. His ‘Dog Blood’ collaboration with Skrillex has continued to set the world on fire, with an upcoming headline performance at the Movement Electronic Music Festival in Detroit, whilst his pioneering sound has also been heard via solo performances at Ultra Music Festival in Miami, Womb in Tokyo and Berghain in Berlin. With his 2015 activity built around the world tour supporting Boys Noize Records reaching the decade mark, it’s clear that there is no stopping him…

Tiga has also had a storming twelve months with his prolific studio output resulting in a series of outstanding productions. Included in this is ‘Bugatti’, which followed his monumental ‘Lets Go Dancing’ collaboration alongside Matthew Dear’s Audion alias. With tracks from his new album also set to be showcased at Heaven, ahead of a busy summer schedule with appearances at festivals like Sonar, Parklife and Mysteryland, it’s safe to say Tiga is on a winning streak like never before.

Taking place under the arches of Charing Cross station at the brilliant Heaven, Boys Noize will welcome a whole host of label mates and some very special handpicked guests including Ed Banger’s Busy P. Located in the heart of the capital, Heaven has played host to some of the most memorable parties in London over the past forty years and will be opening its doors again for this one-off celebration. With the majority of today’s revelers having not had the chance to experience this seminal nightclub, this unforgettable occasion is bound to have fans scrambling for tickets…