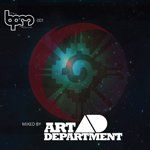 BPM and No.19 Music are proud to announce the release of the first official compilation album from Mexico’s hugely successful annual electronic music festival, compiled & mixed by the one and only Art Department. The compilation is the first chapter in a planned series that will see 2 editions a year from some of the festival’s favourite artists and who better to kick things off than BPM linchpins Art Department, who draw on their close bond with the event to deliver something truly special. Released in late January, the magical selection will showcase the sorts of sounds and styles you will encounter at the much-loved cultural event that is BPM, all expertly mixed by the hugely influential duo of Jonny White & Kenny Glasgow.

The BPM Festival itself has become a go-to place for the finest artists and most clued-up clubbers each New Year. Playing out on Playa Del Carmen’s world-class beaches, it’s a place to relax and recuperate in the company of some of house, techno and electro’s essential artists and has been a key date on the dance music calendar for Art Department & No.19 Music for many years.

The mix kicks off with a brace of tracks from German producer Oskar Offerman and sets off a wonderfully deep-seated groove in the process. From there it’s a perfectly programmed and tightly woven selection that touches on deftly tousled house from Deniz Kurtel, tracky tech from Boris Horel and plenty of celestial melodies of the sort that have you looking to the sky.

A certain highlight of the mix is the Mind Against 909 Remix of Art Department’s own timeless anthem, ‘Sun Comes UP, whilst other No 19. Music stars such as Eric Volta and Louie Fresco also appear with essential and unique offerings that really stand out.

There are also some fine artists from a wider sphere enlisted, namely Canadian techno maestro Mathew Jonson with his excellent remix of VCMG, Swiss men Ripperton and Deetron and Innervisions associate Marcus Worgull.

Of course nothing will compare with being at the festival itself, but the captivating BPM001 mixed by Art Department is about as close as you will get to the experience without leaving the comfort of your own hood.