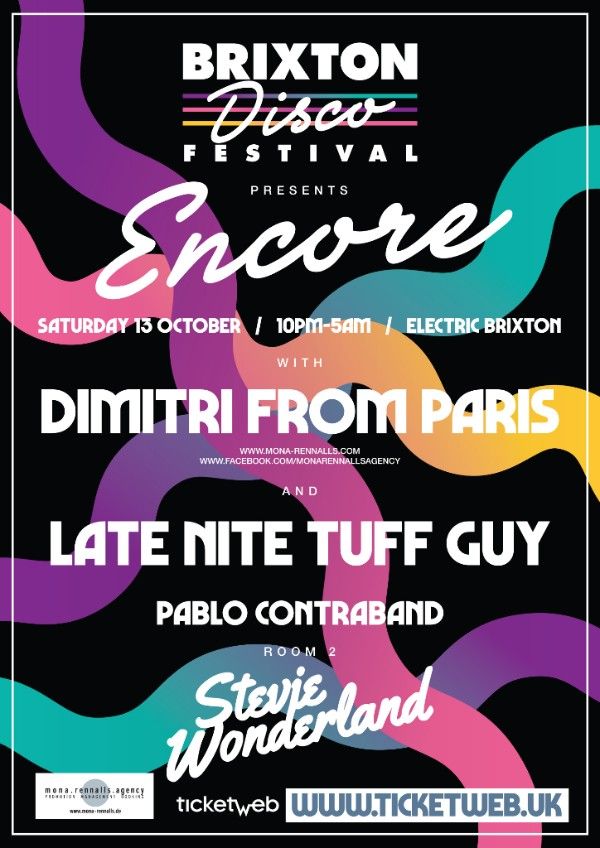 Following the inaugural sold out Brixton Disco Festival in April, the party returns for an Autumn one-off special event at the iconic Electric Brixton this October.

Brixton Disco Festival announce two of the biggest disco DJs on the planet, Dimitri From Paris and Late Nite Tuff Guy, who will be heading things up, supported by Pablo Contraband and a takeover of Room 2 by one of London's finest disco collectives, Stevie Wonderland.

Disco doyen Dimitri From Paris is one of the most prolific disco producers and DJs of our time, having created numerous masterpiece across his career. Where other DJs shy away from defining their sound for fear of being pigeon-holed, Dimitri has no qualms about being known as a ‘disco king’. His superb new album 'Le Chic Remix', showcasing edits and remixes of Chic productions, came out on 27th July and including three brand new mixes.

Late Nite Tuff Guy is a new breed of disco vigilante, peddling the most credible of disco edits and accruing some serious acclaim from an illustrious roll call of industry people in the know. Greg Wilson, Jackmaster and Dimitri from Paris have been regularly playing a handful of LNTG tracks in any given set and their ongoing support is testament to the quality of his work.

This is a very rare opportunity to see both of these two disco heavyweights on the same stage together this October.