The video, directed by Swedish collective Stylewar, is completely comprised of stock footage depicting a corporate workplace setting, edited in a satirical way to complement the basslines and marching beat of the track. After hand-selecting the base stock clips out of thousands of hours of footage, Stylewar manipulated, edited and employed VFX to bring the storyline to life and create a video of distorted reality. The final result gives a comical and absurd tone, while at the core lies a much deeper, darker commentary on modern society – one that’s complex and multifaceted, and crafted in a way that leaves its meaning open to interpretation.

Stylewar says: “The idea for this video was born out of creative starvation during the era of COVID-19. We’ve always had a strong fascination for stock footage and the thoughts and process that goes into creating it, so since it was impossible to execute anything close to a normal shoot, we moved forward with a concept using solely that and CGI.

“The pull to use stock footage became centered around this niche subset of content for the corporate business world, for it can be so cliché and mind-bendingly generic. We love how hyper-generic it is, in every detail. From cast, wardrobe, props to locations and especially the acting – it’s all super-shallow and false. So, with this as a base we wanted to create an alternate reality: what would happen if there was a complete inversion to this world and sense of order. Are they all fake? Is everything fake?”

Exploring a defiant and novel intensity in ‘KEEP MOVING’, the tech-directed approach is testament to BRONSON’s pursuit of new creative frontiers beyond their respective projects. The trio joined forces to craft a body of work that reflected the duality of lightness and darkness inherent to the human condition. The result is an album that strikes a balance between intense, emotive, instrumental-heavy tracks like ‘KEEP MOVING’ and ‘VAULTS’, contrasted by cathartic, melodic, vocal songs like ‘HEART ATTACK (feat. lau.ra)’ and ‘KNOW ME (feat. Gallant)’. 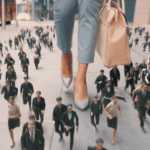