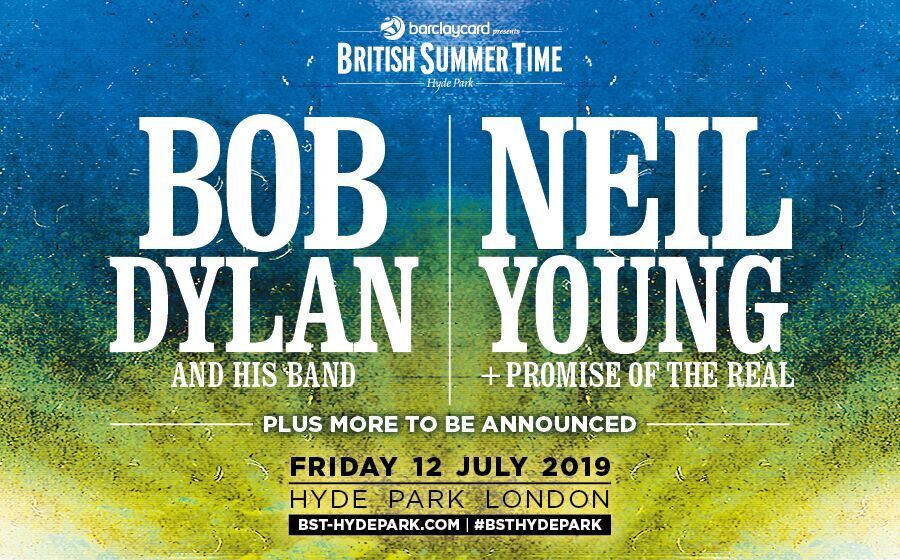 Barclaycard presents British Summer Time Hyde Park announces its first headliners for 2019 – two of the greatest musicians of all time on one HISTORIC night. Bob Dylan and Neil Young are joint headliners.

Bob Dylan’s impact on popular music and culture is immeasurable. The recipient of the Presidential Medal of Freedom and the 2016 Nobel Prize in Literature, he is responsible for some of the most influential albums of all time, such as ‘The Freewheelin’Bob Dylan’, ‘Highway 61 Revisited’, and ‘Blonde on Blonde’. He continues to be vibrant and on the cutting edge, Bob Dylan has received 10 GRAMMY Awards (including wins for Love And Theft, Modern Times and the Album of the Year GRAMMY for Time Out of Mind), as well as the Academy Award for Best Original Song for ‘Things Have Changed’ in 2002.

Neil Young remains the only artist of the rock era to compare to Dylan. Classic albums like ‘Harvest’, ‘After The Goldrush’ and ‘On The Beach’ are some the best in the whole genre. But Young remains hugely relevant and prolific, releasing 2 albums within months of each other in 2017/2018, as well as a stream of archive albums from classic live shows over the years, underlining his incredible live legacy. This time, he brings Promise of the Real, with whom he recorded 2017’s album ‘The Visitor’, their second studio album together and this year released the soundtrack album ‘Paradox’.  The band features Willie Nelson’s sons Lukas and Micah.  They also star in Bradley Cooper and Lady Gaga acclaimed new movie ‘A Star Is Born’, with Lukas as musical consultant.

Barclaycard presents British Summer Time Hyde Park will be a unique occasion, perhaps never to be repeated. Considered the greatest songwriters of their generation, their contribution to the history of rock music puts them above even their most legendary peers.

Last year continued the tradition of must-see experiences that has seen The Rolling Stones return to Hyde Park, Carole King play her classic album ‘Tapestry’ in full for the first time ever, comebacks for The Strokes and The Libertines, Stevie Wonder play Songs in The Key Of Life and many more. 2018 saw amazing sold out shows with Roger Waters, Bruno Mars, Michael Bublé, The Cure, Eric Clapton and Paul Simon’s last ever UK concert.

James King, Senior Vice President, AEG Presents comments:
“Barclaycard presents British Summer Time has always tried to deliver the greatest possible one off live experiences for music fans in London and being able to bring together two of the biggest cultural icons together for this historic day of music counts as possibly the biggest event we have ever delivered in Hyde Park.”

Daniel Mathieson, Head of Experiential Marketing and Partnerships for Barclaycard, says:
“I’m blown away by the calibre of music royalty coming to Barclaycard presents British Summer Time Hyde Park 2019. With these legendary artists already confirmed, and many more still to be announced, you won’t want to miss it. Barclaycard customers can get early access to tickets with an exclusive 48-hour presale from 9am on Tuesday 27th November, plus customers can get 10 per cent back at the checkout with each and every presale ticket bought through Barclaycard Entertainment.”