BST Hyde Park – Florence + The Machine and The National announced! 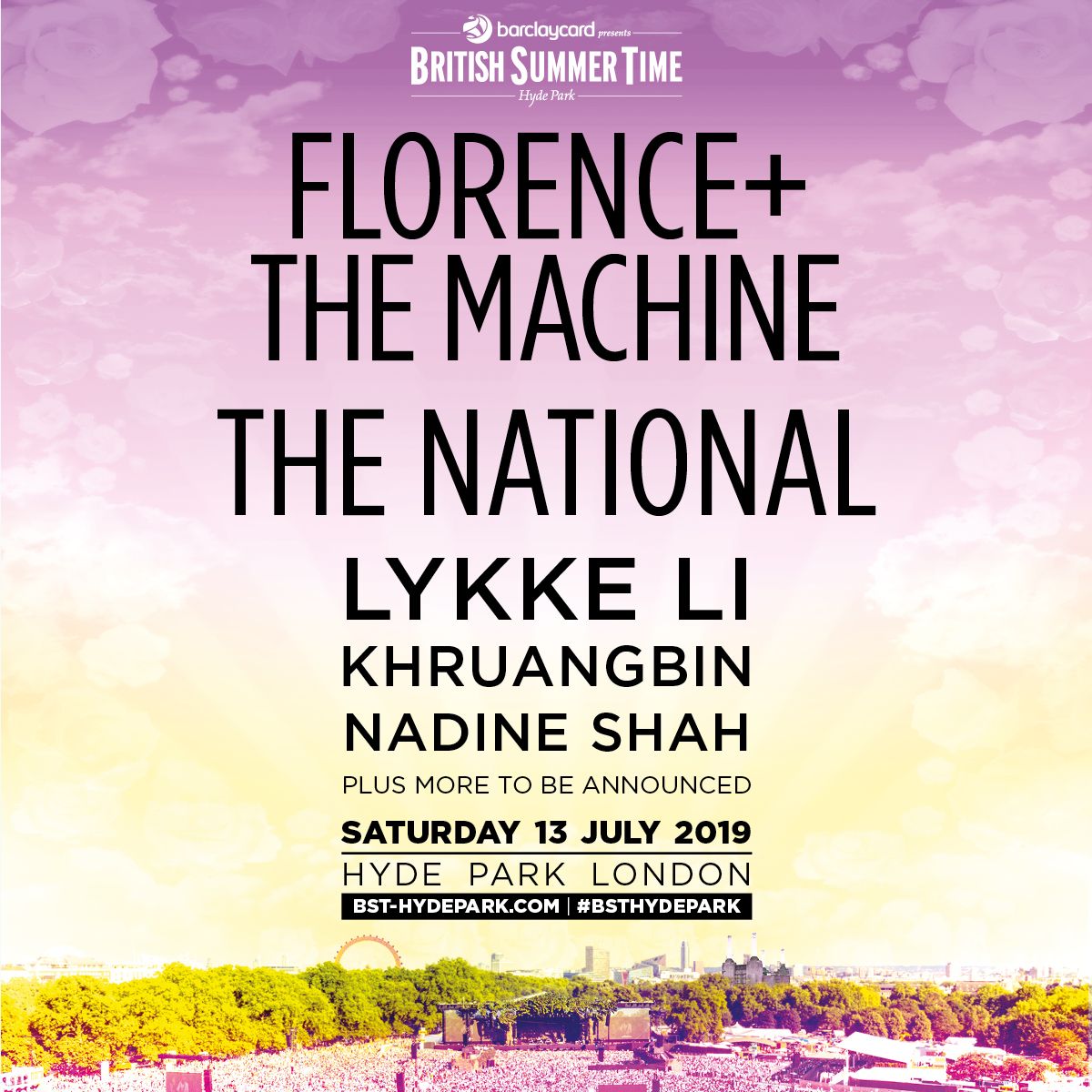 BST Hyde Park – Florence + The Machine and The National announced!

It’s been a remarkable year for Florence, whose fourth album ‘High As Hope’ already has the feel of a career-defining moment. Featuring the anthemic singles ‘Hunger’, ‘Sky Full Of Song’, ‘Big God’ and 'Patricia', Florence started writing the record (which is also the first she has officially co-produced) in solitude in South London: routinely cycling to her studio in Peckham everyday to, as she puts it, “bang on the wall with sticks”. She took the songs to Los Angeles with her friend and co-producer Emile Haynie, opening them up along the way for collaboration with the likes of Kamasi Washington, Sampha, Tobias Jesso Jr, Kelsey Lu and Jamie xx. Florence mixed the record in New York, where the daily, reassuring view of that iconic skyline – often in stark contrast to the chaos of the wider world – gave the album its upbeat title.

What’s emerged – alongside the stunning new live show she will showcase at Hyde Park – is an artist who appears more certain of herself than ever. Florence’s recent tour in support of ‘High As Hope’ featured two sold-out dates at London’s O2 Arena and was greeted with across-the-board five-star reviews. With the album also landing Welch the third Mercury Prize nomination of her career, Florence + the Machine’s live return to London next summer is truly not to be missed.

Sharing the stage are an American indie institution from Ohio, festival favourites and one of the most highly rated live acts around – The National. Latest album Sleep Well Beast lived up to the intense anticipation generated by an acclaimed catalogue and broke new ground with their first UK Number 1 album. They celebrated last year with their largest ever UK headline show at All Points East festival and by headlining 4 nights at the Eventim Hammersmith Apollo. Their big return to BST Hyde Park comes after thrilling critics and fans in support of Neil Young’s show in 2014.

Lykke Li is instantly recognisable with her sensuous, barely there vocals, backed up by an electro dance sound. The Swedish singer gained momentum in the 2000s with a handful of retro-chic singles including Little Bit. Her debut album, 2008's 'Youth Novels' proved an international success and there's been no stopping her since. Released earlier this year, Lykke Li’s fourth album 'so sad so sexy' shifts away from the dream-poppy breakup ballads of 2014's 'I Never Learn' toward airy, melancholic takes on trap and R&B.

Khruangbin (Thai for airplane, or literally "engine fly") are a jet-setting trio from Texas.Their dreamy sound comes from a blend of global music influences with soul, dub and psychedelia. They released their debut album 'The Universe Smiles Upon You' in 2015, followed by 'Con Todo El Mundo' in 2018 and have since worked with the likes of Maribou State.

Also added to this magnificent bill is Nadine Shah, whose third album, ‘Holiday Destination’ was this year nominated for a Mercury Prize, reward for a record that summed up the world of 2018, dealing in song with the refugee crisis, Trump, Brexit and more set to her most commercial sound to date. Finding her voice as a Muslim woman in music, Shah’s post punk insights make her one of the most unique and vital British artists performing today.

Last year continued the tradition of must-see experiences that has seen The Rolling Stones return to Hyde Park, Carole King play her classic album ‘Tapestry’ in full for the first time ever, comebacks for The Strokes and TheLibertines, Stevie Wonder play Songs in The Key Of Life and many more.

James King, Executive Vice President Live Music, AEG Presents comments:
"Over the past ten years Florence Welch has rightfully cemented herself as one of the UK's finest performers. Her unforgettable live shows go from strength to strength with every passing tour. It’s a delight to welcome her back onto the Great Oak Stage at Barclaycard presents British Summer Time 2019 for what’s certain to be a phenomenal homecoming show. Joining Florence will be The National, another amazing band at the top of their game, as I’m sure anyone who saw them headline this years’ All Points East will agree. These two incredible artists will be joined by one of the strongest bills we have assembled for BST Hyde Park. It will be a magical day."

Daniel Mathieson, Head of Experiential Marketing and Partnerships for Barclaycard, says:
“Barclaycard presents British Summer Time 2019 is shaping up to be a fantastic line-up, and we’re excited to welcome back Florence + the Machine and The National. A chance to see these two great acts headline together will be an unforgettable experience! Barclaycard customers can get early access to tickets with an exclusive 48-hour presale from 9am on Monday 19th November, plus customers can get 10 per cent back at the checkout with each and every presale ticket bought through Barclaycard Entertainment.”

Alun Mainwaring, Head of Events and Filming at The Royal Parks, said:
“We are thrilled to welcome back one of the world’s greatest vocalists and her band, Florence and the Machine. Their outstanding performance in Hyde Park to a sell-out audience in 2016 was a BST highlight and we can’t wait to see them perform once again on the Great Oak Stage.  Florence joins a distinguished list of artists already confirmed including Bob Dylan and Neil Young and Robbie Williams, meaning next summer’s concerts will be headlined by some of the biggest and best musicians from across the globe. Music events are vital to the future of the parks bringing in funds which go into managing and maintaining these beautiful and historic green urban spaces.”