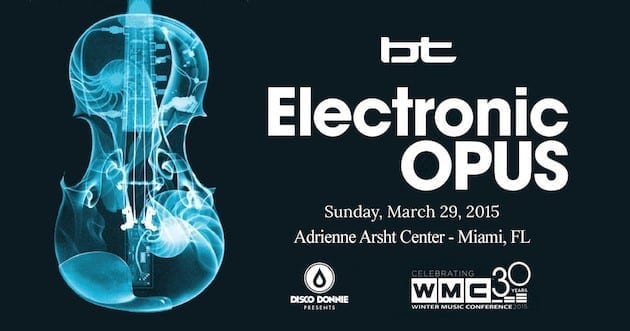 Electronic Opus is a unique and immersive symphonic/electronic concert event featuring the greatest hits from the award winning world renowned multiple platinum artist, DJ, performer and film composer Brian Transeau (aka BT). BT is considered one of the people who transformed music forever by helping to create the Trance/Electronica/Dance music genre and deliver it to the masses.

Teaming up with Disco Donnie Presents and TanZ Group, the worldwide, multimedia show will combine top orchestras along with the multi-faceted on stage talents of BT–including vocals, guitar, piano/synth and of course, his well-known DJ skills. The show will include exclusive, synchronized HD video footage and music arrangements set to synchronized lighting provided by the groundbreaking production company, Volvox Labs, as well as unique interactive segments to create an explosive, one-of-a-kind entertainment experience. The first performance will debut on March 29th, 2015 in Miami, FL at the Adrienne Arsht Center during the Miami Winter Music Conference.

Picture the energy and excitement of an EDM performance mixed with the power and emotion of a symphony orchestra combined together with technology, interactivity and stunning visuals that only EDM can provide. Incredible, high energy, melodic electronic music from one of the top artists in the field, together with the artistic and cultural merits and power of a full symphony will dazzle crowds of all ages.

The Creative Director and Executive Producer of the show is world-renowned, 25 year video game industry veteran Tommy Tallarico. Tommy has been touring his worldwide, multimedia symphonic show Video Games Live to millions of people for over 10 years. Video Games Live is considered the most successful live symphonic multimedia touring show ever and, according to Symphony Magazine (Fall 2012) and Guinness World Records, has helped to define and change the entire business of orchestral performances.

Watch the mini-documentary of the recording sessions for BT’s Electronic Opus. Filmed on location at Smecky Studios in Prague, Czech Republic.