CADE and Desiigner link up on new single ‘Home To You’ 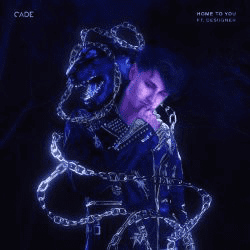 CADE and Desiigner link up on new single ‘Home To You’

Tampa-born singer, songwriter and producer CADE has collaborated with Brooklyn rapper Desiigner on new single ‘Home To You’, which is out now via Ultra.

One of the most prominent artists in US music, CADE has achieved over half a billion streams on Spotify alone, with a sound that fluctuates between future R&B and dance. Garnering over 4.5 million monthly Spotify listeners, he continues to widen his fanbase by supporting artists such as Cheat Codes, Jeremih, Ke$ha and Mike Posner, while performing at festivals such as Summerfest andLollapalooza.

Desiigner rose to prominence in 2016 after the release of his debut single ‘Panda’, which topped the US Billboard Hot 100.The same year, Kanye West (who sampled ‘Panda’ for his seventh album The Life of Pablo) announced Desiigner had signed to his GOOD Music imprint.

His first release in six months, ‘Home To You’ sees CADE again demonstrate why he is one of the most in-demand artists in the US.