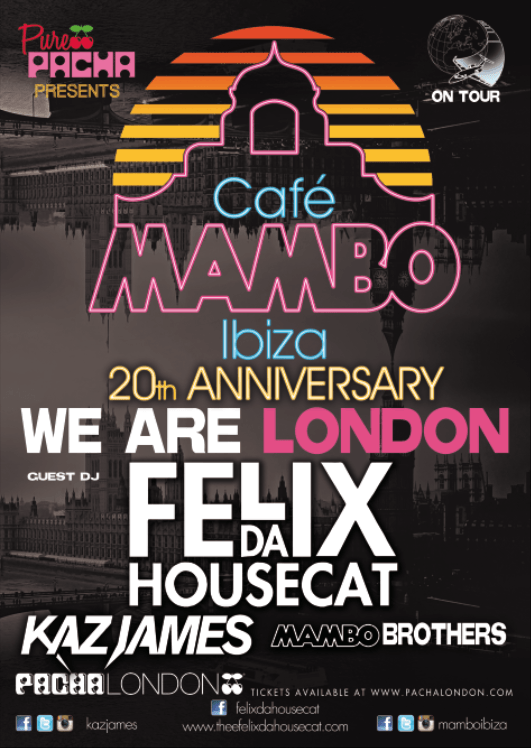 April 1994. 20 years have already gone by since Mambo first opened its’ doors, already welcoming the world’s best DJs at the time, starting a journey which has made of Café Mambo, throughout the years, one of the electronic music hubs in Ibiza and the world.

DJ’s such as Franky Knuckles, Paul Oakenfold, Erick Morillo, Sasha, Roger Sanchez, Pete Tong, amongst others, played in the emblematic DJ booth, which throughout the years has seen some of the biggest DJ’s in the scene. Eric Prydz, David Guetta, Nervo, Steve Aoki, Afrojack, Solomun, Luciano, Nic Fanciully, Chuckie, Sander Kleinenberg are only some of the artists who have set the vibe for thousands of people who meet up on the sunset strip every evening to watch the sun disappear behind the sea in San Antonio, making of Café Mambo Ibiza a must-see for the hundreds of thousands of tourists who come to the island every year.

To celebrate this milestone, and as part of a series of events which are being celebrated around the world as our “20th Anniversary”, we are pleased to announce that on Saturday, 15th of March, Café Mambo Ibiza will celebrate the first of this series of events in one of the most important cities to us, London. Pacha London, after 7 epic Mambo parties to date, will welcome Felix da Housecat, Kaz James and the Mambo Brothers on the deck, who will make sure the beats don’t stop until the wee hours of the morning…

“We are delighted with the Cafe Mambo residency in Pacha London. This first year has been brilliant, with each party being better than the last! We are looking forward to the 15th of March to share the DJ booth with two great friends – Felix da Housecat and Kaz James, to celebrate our 20th year anniversary! It will be an unforgettable night – and we will make sure there is enough Mambo Hierbas for everyone ;). We can’t wait to announce the following parties and guests, this year will be huge! See you in London!” – Mambobrothers.

For all those of you who love the best of electronic music, and who have experienced one of the wonders of the world, the iconic view of the sunset from the Café Mambo terrace, don’t miss out!

Buy your tickets or reserve your VIP table at www.pachalondon.com.