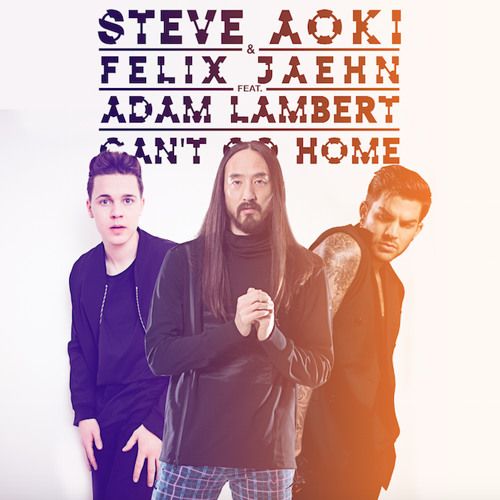 Over a month ago, the internet sparked when world-renowned producer STEVE AOKI shared pictures and video of him in the studio with pop sensation Adam Lambert and now fans can now experience ‘Can’t Go Home’. Co-produced by Felix Jaehn–known for his work on OMI’s global smash ‘Cheerleader’–and AOKI, the two come together for the first time to provide a very unique dance floor groove featuring Lambert.  The song (which made its official premiere on People.com) is available now at all digital retailers on Ultra Music.

"This song is a genre crossing collaboration from two different worlds between myself and Felix Jaehn and that's the beauty in mixing it up and making something so unique as ‘Can't Go Home,’” AOKI told People of the track.  “Adding one of the best vocalists in the world Adam Lambert on it just brings this special song to a whole new level. Super excited about sharing this with the world!”

"The recording session with Steve was so much fun!!! He's got such an upbeat energy!" says Adam Lambert of the song.  “It's been great fun to work with Steve Aoki & Adam Lambert on this record. Both are experts of their craft,” adds Felix Jaehn.  “Together we combined three styles in one record which makes it sound super fresh!”

Meanwhile tickets are on sale now here  for the premiere of the documentary ‘I’ll Sleep When I’m Dead’ – which takes a compelling look into the life and mind of STEVE AOKI, one of dance music’s most hardworking, controversial and captivating characters – at the Tribeca Film Festival in New York City on Friday 15th April at the Beacon Theatre.  The screening will be followed by an exclusive conversation with AOKI and a live performance where fans and movie goers can experience the music that was created during the film.

‘I’ll Sleep When I’m Dead’ was shot during the making of STEVE AOKI’s Neon Future double album (Dim Mak/Ultra Music, 2014/15). It follows AOKI on his journey to play the biggest show of his career at Madison Square Garden and centers around his complex yet loving relationship with his father, the Benihana restaurant tycoon and former Olympian Rocky Aoki.  ‘I’ll Sleep When I’m Dead’ comes from the minds behind JIRO DREAMS OF SUSHI and explores similar themes of family bonds and expectations.  It is directed by Justin Krook, produced Matthew Weaver (Rock of Ages), Matt Colon, Happy Walters and David Gelb (Chef's Table, TFF2015 Jiro Dreams of Sushi, TFF 2011).

Read more about the film here: