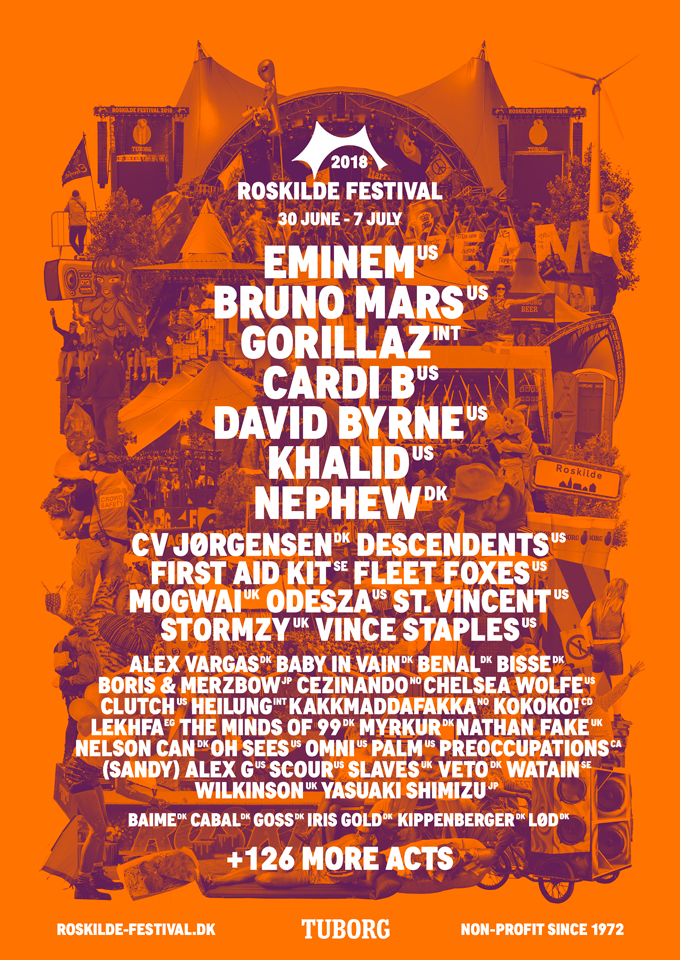 Following yesterday’s Eminem announcement, another 17 acts from all over the world have been added to the Danish non-profit festival.

Grammy nominee Cardi B’s rise to stardom has been unconventional: she went from gang member to stripper, becoming a local celebrity, social media personality and reality tv star before turning to music. She is the first female rapper in 19 years to top the Billboard Hot 100 chart and the first ever to have three singles in the top 10 at the same time.

Several hit singles and mixtapes into her brief career, Cardi B is already a bonafide star – and she hasn’t even released her much anticipated first studio album.

19-year-old pop sensation Khalid will bring his soulful melodies to Denmark following a massive breakthrough in 2017 that included the release of his debut album American Teen, including hits such as Young, Dumb and Broke, Saved and not least Location.

Grammy-nominated electronic pop duo Odesza are back at Roskilde Festival, and acclaimed Ninja Tune magician Nathan Fake will be one to watch for fans of slightly darker electronic music.

The 17 new acts come from eight different countries, reflecting the diversity at the non-profit festival.

“Cardi B captures 2018 better than any other artist with her mix of modern New York and Atlanta and old school 90’s rap. With her, St. Vincent, Khalid and 14 other artists from four continents we are gearing up for another Roskilde Festival with both established artists and the stars of tomorrow.”

175 acts in total
48 acts have now been announced for Roskilde Festival 2018, and many more will be revealed soon.
Acts such as Eminem, Gorillaz, Bruno Mars, David Byrne, Stormzy, First Aid Kit and Mogwai have already been announced. A total of 175 acts will be playing the eight different stages.

With more than 175 music acts in the line-up performing on eight stages and over 100,000 passionate music lovers gathered for a full week, Roskilde Festival is among the most unique music festival experiences in the world. A position the festival has held since the early 1970s.