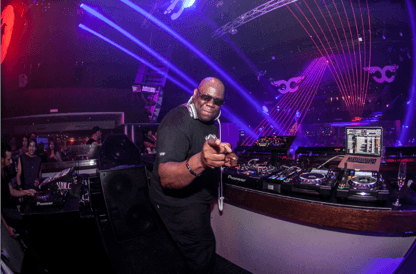 On Tuesday, 24 September Carl Cox and his Revolutionary crew join forces as The Party Unites @ Space draws to a close for 2013.

DJ Sneak, Loco Dice, tINI, Jon Rundell and Yousef will join Carl for one of the biggest, most anticipated events of the Ibiza calendar, as thousands of friends gather to celebrate yet another fantastic summer season, and say hasta la vista Ibiza until 2014.

The Party Unites brought together an unmatched array of DJs in 2013, affirming Carl as one of the industry’s premier talent spotters, and boldest programmers. Clubbers were treated to unforgettable music from Nic Fanciulli, Steve Rachmad, Laurent Garnier, Adam Beyer, Heidi, Eats Everything, Seth Troxler, Nina Kraviz, Masters at Work, Green Velvet, Nicole Moudaber and Loco Dice – among many others.

Other club brands rise and fall, but the Revolution marches on. In 2013 many thousands of music-savvy clubbers from all over the world flocked to Space every Tuesday night to join what has become, over the course of the party’s 12 years in Ibiza, a joyful, uplifting rite of summer. The energy and loyalty of this global army of techno warriors are what give the Space parties their unique vibe. “The summer has been enormous success,” says Carl’s manager Lynn Cosgrave. “We have had some very special nights that have made history.”

For the last two years Carl Cox has run a DJ contest to unearth brand-new talent for the Revolution. Andrea de Niro, from Greece, won in 2012 and returned to play again this summer: “Amazing night, amazing line ups, amazing crowd,” he says. “I enjoyed it even more than last year.”

The 2013 contest winners, Deiva & Djos, summed The Party Unites saying: “We spent a magic night that we will never forget.”

The Last Chance… to experience The Party Unites for yourself!