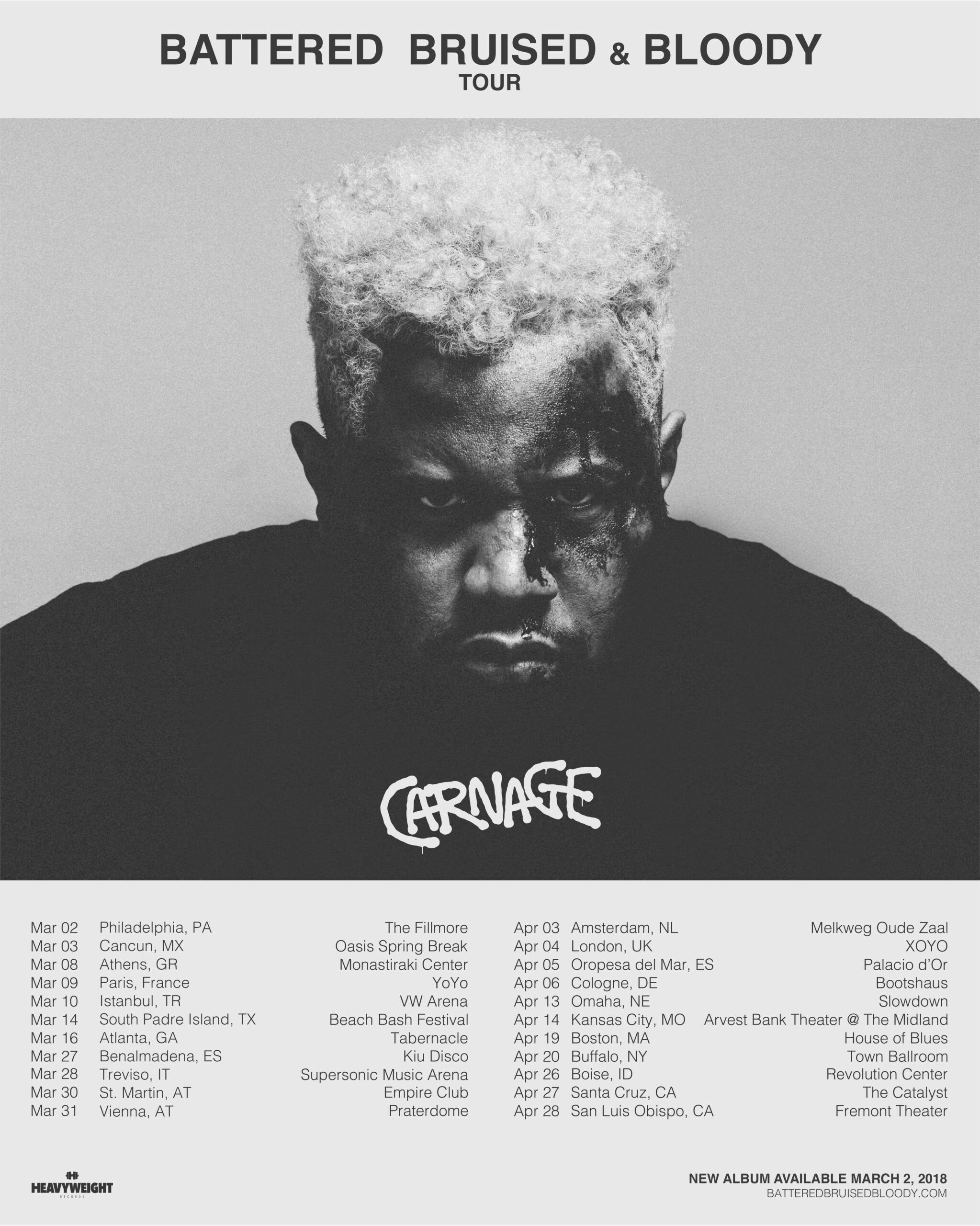 Earlier this week, Carnage also revealed the cover art and title to his much-awaited sophomore effort Battered Bruised & Bloody, slated for release on March 2nd via his own imprint Heavyweight Records, and is available for Spotify pre-save now. After months of dropping hints, guest features and track listing for the upcoming album are still under wraps and will be announced shortly.

Recently, the tireless producer released back-to-back well-received singles from the album; “I Shyne” with Lil Pump, and “Learn How To Watch”, featuring Mac Miller and MadeinTYO. Since release “I Shyne” has surpassed 2.8 million Spotify streams, 8.3 million views on YouTubeand 3.5 million plays on Soundcloud. Meanwhile, “Learn How To Watch” has over 2.5 million Spotify streams, and the video has surpassed 2.9 million YouTube views.

In 2017 Carnage debuted the eagerly-awaited and critically lauded collaborative EP with Young Thug, titled Young Martha. He also introduced the world to his hip-hop persona, THIRTYRACKon the Step Brothers EP with G-Eazy, and unleashed two solo tracks, as THIRTYRACK, “Xan Man” and “Fuck N****”. Additionally, in 2017 the worldwide hit, “I Like Tuh” feat.iLoveMakonnen, earned him an RIAA Gold certification and both Young Martha and Step Brothers EPs garnered over 84 million streams collectively on Spotify alone. Not stopping there, he launched his own label, Heavyweight Records.

Carnage has single handedly been elevating his unique mix of genre bending production to mainstream popularity ever since he produced the hit song, “Big Spender” with Theophilus London and A$AP Rocky. His much sought-after production work has led to collaborations and producer led projects that include hip-hop heavy hitters Migos, Rick Ross, A$AP Ferg, Lil Uzi Vert and many others.

2018 is already setting up to be an amazing year for the pioneering entrepreneur who will hit the ground running with national and international tour dates and his annual RARE festivals that showcases superstars from the hip-hop and electronic scene.

*All dates, cities and venues below are subject to change.*