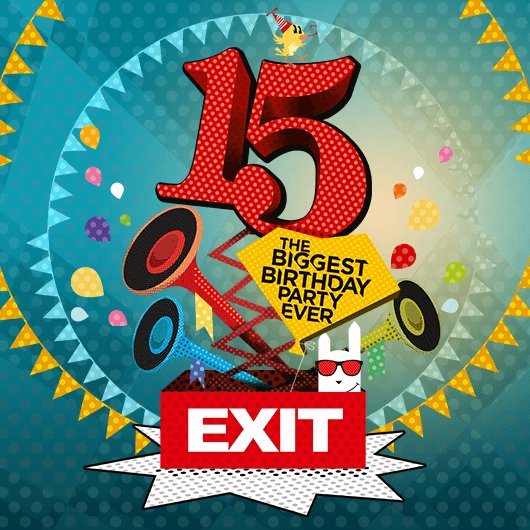 EXIT started off humbly but bravely back in 2000 when it was a student movement fighting for freedom and democracy in Serbia. Today it’s the ‘Best Major European Festival’! What a difference 15 years can make. Being awarded that prestigious title was no small feat, but it reflects how EXIT has grown over the years attracting a global audience of 2.5 million visitors from 60 different countries. What was once a movement is now one of the most prestigious music events in the world!

You don’t need an invite to join EXIT’s party – everyone’s invited: from school leavers and students to the good, loyal EXIT fans who have helped fan the festival’s flame with their positive energy.

As with previous years, EXIT has special promotions set up for all loyal early birds. Very limited amount of early bird tickets priced at £79+b/f / €99+b/f will go on sale on 12th December at noon CET. Everyone who buys the 4-day ticket set will be rewarded with a free ticket to the EXIT Adventure! That means that early bird buyers will get a ticket for SEA DANCE FESTIVAL completely free once they register for it. That’s 40% discount compared to a regular ticket for 7 days of EXIT Adventure!

A very limited run of tickets for 3 days of Sea Dance Festival priced at £39+b/f / €49+b/f, will also be available from 12th December at noon CET.

Love lists? We do, too. There’s a list of all the links you can go to if you want to buy tickets for EXIT and SEA DANCE FESTIVAL at www.exitfest.org. Just don’t forget that early bird tickets are limited and available on a first come first serve basis.

Come and join the party in 2015! First performers will be announced soon! Watch this space!