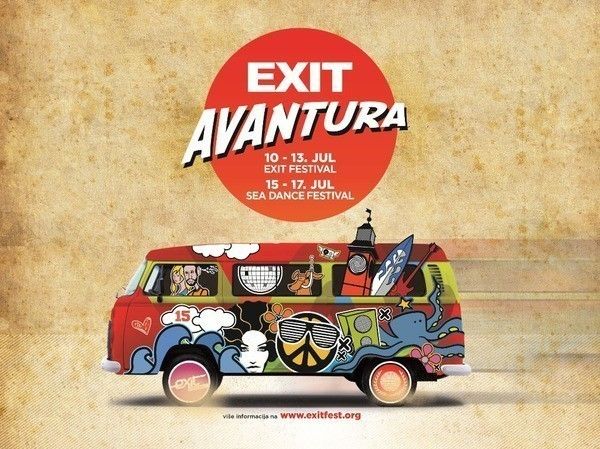 If you really love EXIT festival and four days are just not enough, do we have a surprise for you! To celebrate the 15th edition, EXIT festival invite you on a seven-day EXIT ADVENTURE in two different countries! In 2014 EXIT will be held at a very well-known place, the best festival venue in the world – Petrovaradin Fortress in Novi Sad, after which the party moves on to one of the most beautiful beaches on the magical Adriatic Sea in Montenegro. With its central stage and camp site at the Jaz beach, the festival finally gets its”sea” edition, named SEA DANCE FESTIVAL.

Are you ready for EXIT ADVENTURE? You better be, as EXIT has once again prepared an unbelievable early bird offer! From December 12 until January 15, a limited amount of four day tickets to EXIT at the Petrovaradin Fortress in Novi Sad will be available for only £75 / 89 Euros! And that is not all! Everyone who buys this ticket package during this promo period only will get free camping in Novi Sad and a three-day SEA DANCE FESTIVAL ticket for free.

EXIT 2013 was markedby a record breaking year. There was a huge increase in audience numbers with over 200,000 people during the 5 days of the festival, as well as a burst of true , revolutionary energy which filled the fortress walls, later spreading through the veins of Novi Sad – its beautiful streets. Watch the 2013 EXIT highlights here

This year, EXIT ADVENTURE spreads this energy even further, all the way to beautiful beaches of Montenegro. Get roady for a road trip and enjoy a diverse range of artists, for seven unforgettable nights spent with your best mates in the sizzling hot balkan sunhine. Sounds good? It’s time for EXIT ADVENTURE!

From January 15, the regular ticket price for EXIT Festival will be available for £95 / 110 Euros + b/f, while the entire EXIT ADVENTURE (EXIT + SEA DANCE FESTIVAL) ticket can be yours for £115 / 135 Euros. After January 15, camping tickets for EXIT and SEA DANCE will be sold separately, and will be available at the price of £25 / 30 Euros each + b/f each.

WHAT THE ARTISTS SAY:

Annie Mac (Radio 1): “Exit was unforgettable, the setting was spectacular, the line up was massive, (I will never forget that dance stage sound system as long as I live!) and the people were completely inspiring. It’s a truly special festival.”

David Guetta: “The Exit festival was really magical! The place was unbelievable – a rave up a mountain. The energy of the people was fantastic – the crowd were so enthusiastic.”

John Taylor, Duran Duran: “To headline here in the Balkans, their own Glastonbury Festival, their Coachella, was a real trip. The audience was fantastic, kids travelling in from all across the region, gave us a great welcome which made for a career high!”

Ed Lay, Editors: “We went up to the festival as punters the day before our show and felt it was the most fantastic place to watch live music. When we finally played the following night, the crowd, the view and the atmosphere were even more perfect. Exit is a special place.”

Feed Me: “Probably the most unique festival on the continent and a great crowd, my only regret is that I couldn’t stay for the whole thing.”

Alex Kapranos, Franz Ferdinand: “Exit was more than we could have expected it to be. The audience were exceptional and the setting was breathtaking. I hope they have us back sometime.”

Adrian Utley, Portishead: “It was good to be part of such a politically important non corporate festival that has much good music and intentions in a really beautiful place”

Liam Howlett, The Prodigy: “One of the best festivals in the world. For real”

Mike Skinner, The Streets:”I’m so glad I’ve seen the Exit Festival. It is not just a festival, it is a truly unique all night celebration. The crowd were great fun.”

Karl Hyde, Underworld:”Exit was in a extraordinary setting with so much diversity in one place and it reminded me of how festivals’ used to be in the 90’s. The history of the festival made it even more significant to be part of the event and the enthusiasm and energy with which we were greeted, was a humbling and emotional experience.”