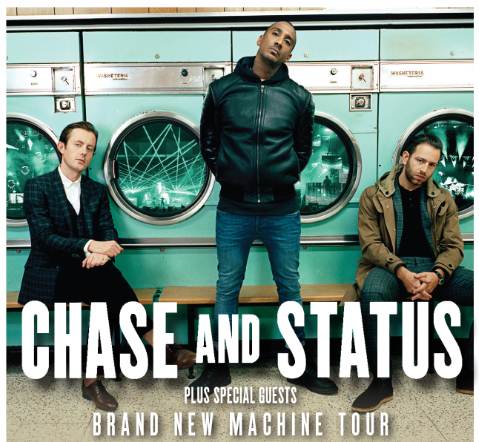 Ahead of their main stage performance at this weekend’s Reading & Leeds Festival, CHASE AND STATUS, today announce their first arena tour. Kicking off on the 31st October in Nottingham, and culminating with a landmark show at London’s The O2 on the 16th November, the tour follows the release of Brand New Machine, their third album, out 7th October.

Fans can access an official pre-sale from 9am Wednesday 28th August where they will be able to pre-order Brand New Machine before anyone else. Tickets are on general sale from 9am on Friday 30th August.

Current single Count On Me featuring Moko, is released on 29th September. Saul Milton (Chase) and Will Kennard (Status) premiered the record on Radio 1 as B Trait’s Special Delivery last month. Always keen to discover and promote new UK talent, Count On Me features the powerful and emotive vocals of Moko, an artist the guys have since signed to their very own respected MTA imprint. The track can be heard HERE:

‘Brand New Machine’ makes a nod to the 90’s rave era which inspired the duo and as you may have come to expect from Chase and Status, includes exciting collaborations with emerging new UK talent and household names from both sides of the pond. Following the hugely successful multi-platinum selling ‘No More Idols’ which spawned 7 A-List singles at Radio 1 including the likes of ‘Blind Faith’ featuring Liam Bailey, ‘Let You Go’ featuring Mali and ‘Time’ featuring Delilah. ‘Brand New Machine’ is no easy feat, but the campaign got off to the best possible start with the first single ‘Lost & Not Found’ featuring the talented Louis M^ttrs, breaking the Top Ten and the second single ‘Count On Me’ already a firm festival favourite and widely acknowledged as one of the anthems of the summer.

Since headlining the prestigious Other Stage at Glastonbury which can be viewed HERE, the duo has been whipping up the type of raucous storm which has now become synonymous with their addition to any festival billing.  Drawing huge crowds everywhere from Roskilde in Denmark to Gurten in Switzerland, they have been unleashing their show across a host of Europe’s biggest festivals bringing ravers and moshers together in a sea of frenzy in front of their stages.