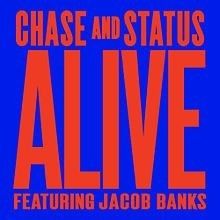 Chase and Status have had an incredible year so far. They headlined The Other Stage at Glastonbury in June, played a storming, riotous set at Reading and Leeds in August, headlined their first arena tour which culminated in a sold out show at the 02 and released their third album Brand New Machine, which stormed into the charts and debuted at #2. Single Count On Me, featuring Moko, was a fan favourite at festivals throughout Europe this summer and broke into the Top 5 of the Official UK charts on release.  Chase and Status’ great year is set to continue, with next single Alive, featuring Jacob Banks, watch the video HERE.  The video was directed by the very talented Josh Cole and the track is released on the 15th December.

Always keen to discover and promote new upcoming talent, Brand New Machine features a raft of rising stars and underground names. Saul Milton (Chase) and Will Kennard (Status) are extremely passionate about finding and nurturing new artists and despite receiving a vast amount of requests to feature from all the big names, they opted for working with emerging new talent including Moko, Elli Ingram, Knytro, Abigail Wyles, Ed Thomas, Jacob Banks and more. The album also plays host to collaborations with the legendary Nile Rogers as well as US rapper Pusha T. Brand New Machine gives a nod to the 90’s rave era which inspired Chase and Status and showcases the duo’s talent to write songs that charge through the boundaries of dance music, and cross over into everyone’s consciousness.

Chase and Status, along with their live band MC Rage and Andy Gangadeen, recently finished their headline arena tour which culminated with a massive homecoming show at London’s 02 Arena on the 16th November. They were joined by stellar support acts on the tour; the immensely talented Moko, who signed to the band’s label MTA Records and featured on single Count On Me; legendary Clipse rapper Pusha T, who also features on Brand New Machine and finally, Belgian super producer Netsky.