Free Like A Bird– the debut single from up-and-coming French DJ and producer Chuck Wonderland– is out now via Elektra Records / Warner Music.

A vibrant amalgamation of electro, house and folk-inspired soundscapes, ‘Free Like A Bird’ sees the Nice-born, Dubai-based producer team up with talented singer-songwriter Larry Lynch, for the pair’s amazing debut collaboration.

Cool guitar licks, upbeat drums and an infectious riff are placed front and centre by Wonderland, who combines Larry’s top-line in perfect symbiosis to create a sure-fire summer anthem.  One thing’s for sure – if this impressive single is anything to go by, you can expect to hear a lot more from this burgeoning Frenchman over the course of 2019.

Chuck Wonderland started his career in the South of France between Monaco & Cannes and is now a very well-known name in the Dubai nightlife scene. He has played with several international DJs including Sebastian Ingrosso, Martin Solveig, The Avener and Bob Sinclar (to name a few) as well as major hip hop artist such as The Game, Akon, Rick Ross, Future and 50 Cent. 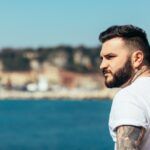