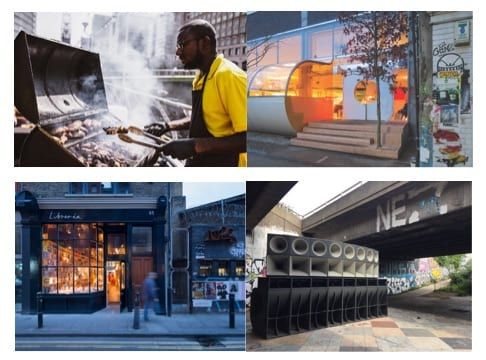 City Life Festival will delve deep into the beating heart of London and celebrate cities as sites of connectivity and creativity, in which people, industries and ideas collide and new possibilities are created.

The new month long, multi venue festival will present a unique mix of the best supper clubs, creatives, workshops, screenings, performances and discussions from the UK’s most progressive movers and shakers.

The festival will champion and showcase London as a place of inclusivity and collaboration and will highlight how the city’s vibrant multicultural community has been the backbone to the creation of its globally celebrated culture
Join us for a journey through the amazing sights, sounds, flavours and voices of London and immerse yourself in the rich and ever-changing tapestry of its inspiring history and progression.

A Sunday session presented by Sheffield Doc Fest with four film salons exploring the connections of place, politics and culture in London from 1960’s to present.

Bill Brewster and his guests recall the heyday of the record store, when vinyl was the only game in town and Soho was the central meeting place for scenesters of all stripes.

Join UK Broadly Editor Zing Tsjeng and a selection of guest writers for an evening of storytelling celebrating the female voice.

A showcase celebrating the vibrant mix of cultures that give London its unique character. This evening will spotlight poets who write about their experiences of navigating racial and cultural identity politics in the city. Featuring performances from Will Harris, Salma el Wardany, Belinda Swami, The Potent Whisperer and Caleb Femi.

Bass In The City

A weekend exploring the impact of the Jamaican sound-system culture on the London music scene.

A series of interviews uncovering the cultural lineage of our city’s iconic sounds – from Jungle and D&B to Dubstep and Grime. The interviews will be hosted by prolific music journalist Lloyd Bradley and will feature celebrated music photographer Eddie Otchere, founding member of Soul II Soul Jazzie B, and Drum n Bass legend DJ Fabio.

A series of supper clubs celebrating the innovation in London’s acclaimed food scene as a direct result of the intermingling of cultures in our city. In collaboration with Kerb, London street food vendors will re-interpret iconic British dishes through the lens of other traditional cuisines. Think Bengali pie and mash, Polish fish and chips and West Indian Sunday roast and much more.

Journalist Kamal Ahmed and Second Home co-founder Rohan Silva discuss Kamal’s book The Life and Times of a very British Man, which tells his story of growing up in 1970s Britain as one of the first generation of mixed race British children.

City Life’s full events programme will be announced soon, for all the latest news please check in at: https://secondhome.io/cultural-programme