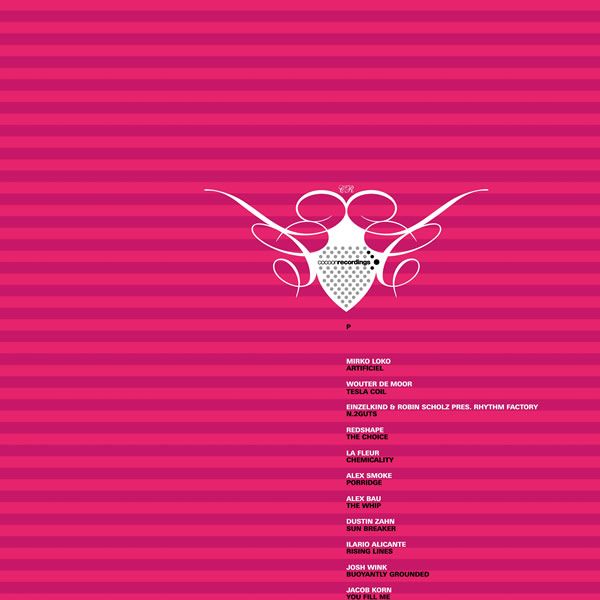 It is the exciting time of year again when Cocoon Recordings rounds up a whole 12 months of house and techno fun on their annual alphabet series compilation. Now up to letter P, this 12 track affair takes in music by the likes of Redshape, La Fleur, Dustin Zahn, Josh Wink and Jacob Korn.

Now one of the longest running series in the techno landscape, Cocoon Compilation P goes for the jugular right from the start, offering a great selection of freaking, crazy and kicking tracks that will make a big impact on dancefloors all over the world.

Mirko Loko is in control from the beginning and his top track ‘Artificiel’ is energetic, crazy and minimalistic all at the same time. With destroyed digital sound fragments it starts things off in real style. From there Wouter De Moor offers up a speedy acid cut that gets straight into your brain, then Einzelkind & Robin Scholz pres. Rhythm Factory – ’N.2guts’, which deals in more smashing acid and continues to take you higher with its physical drums.

Delsin deepsmith Reshape keeps things more moody and stripped back with his lo fi synths and paranoid sense of futurism, then Watergate resident and Power Plant label  boss La Fleur ups the ante with a slick, undulating and rubbery drum line laced with ominous vocal musings and spaced out synths. Soma’s Scotsman Alex Smoke conjures up some off kilter and inventive sounds and textures on his fulsome offering ‘Porridge’, and ‘The Whip’ from Alex Bau then gets all serious with a stripped back and direct bit of heady and subliminal techno.

Every new track brims with exciting ideas and fresh sounds, and the second half of this essential selection takes in tense stuff from Dustin Zahn, punchy and main room bangers from Ilario Alicante and bubbly, late night rollers from Josh Wink. Uncanny Valley star Jacob Korn keeps you dangling on a knife edge with his glassy chords and edgy atmospheres and Atelier Francesco rounds things out on a mournful tip where real end of the world imagery hangs in the air.

This is another diverse and delicious selection of the finest techno tracks of the day, from one of the world’s most influential labels.