Cocoon Take Over The Asylum 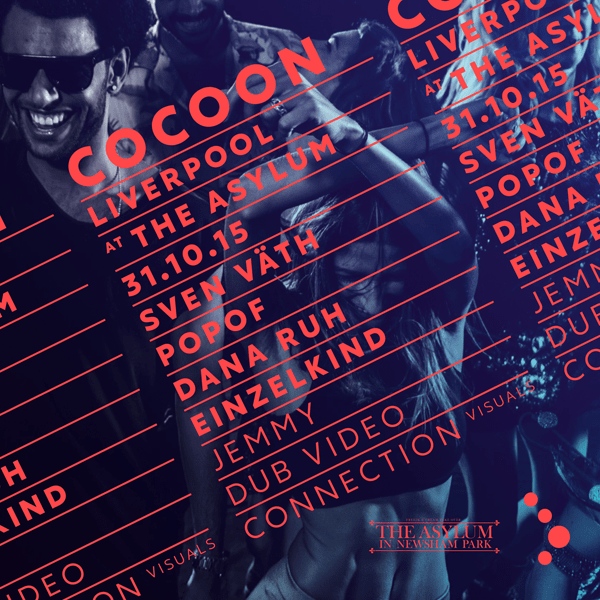 Cocoon Take Over The Asylum

Following on from their sell out inaugural event earlier in the year Freeze and Cream are back at The Asylum, returning to the Old Newsham Park Hospital on Saturday October 31st for a haunting Halloween special. This time round they welcome one of the world’s true electronic music legends to Liverpool – Sven Vath. And he isn’t just coming alone; Sven is bringing his celebrated Cocoon party with him, part of an epic weekend spanning 14 hours – two venues – one ticket.

From 2pm, The Asylum Part 1 becomes the backdrop to a mini festival centred on the site’s open air main courtyard, where techno talisman Sven headlines with an extended set. A legend in his own lifetime with a commitment and passion that has influenced the advance and evolution of electronic music, stellar clubs, record labels and careers have all been launched. Joining Sven will be French DJ and producer Popof, an underground icon of techno and electro who has remixed everyone from The Chemical Brothers to Moby; Cocoon’s own Dana Ruh, a Berlin-based spinner who is resident at the seminal Club Der Visionare and is one of underground dance music’s leading ladies; fellow German star Einzelkind joins them, an esteemed regular at some of the world’s best club, including Panorama Bar, Space Ibiza and Watergate; and Freeze’s own Jemmy completes the brilliant billing.

The action continues for Part 2 at Nation later that night at Cream’s iconic home pulsating in the heart of the city. This is one of the very last opportunities to party in the hallowed three-roomed venue, as in 2016 Wolstenholme Square is being redeveloped and Nation will be no more. Taking over the controls for Part 2 are dance music pioneers, Berlin based duo Booka Shade, as one of the world’s most in-demand production outfits they have also earned a huge live reputation with their innovative live shows, which over the last couple of years has seen them opening for Depeche Mode as part of their world tour, and performing to sell-out crowds around the world. Their mesmerising live performances have even seen them named as ‘one of the world’s Top 5 live acts’ by Resident Advisor. Support for Part 2 will be announced shortly.

After April’s stunning sell out debut Easter show with Music On’s Marco Carola, Freeze and Cream’s philosophy behind The Asylum is refreshingly simple; to build upon the city’s already immense foundations as one of the world’s true bastions of dance music culture and take it to the next level, curating world-beating line-ups in one of the UK’s most spectacular locations for music.

Founded as an orphanage in 1874, The Asylum was later converted for use as a hospital specialising in psychiatric illness, and many of the wards remain untouched since its closure in the 1990s and looms forebodingly over the stunning Newsham Park.